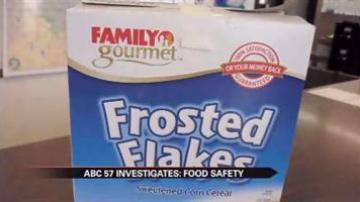 MISHAWAKA, Ind. -- The Indiana Department of Health is investigating a case of a metal object that was found in a box of cereal by an elderly woman. She didn’t find the piece of metal until it was in her mouth.

The woman is 93-years-old and her husband Leonard Rossell says her health is very poor.

He said his wife is dying and has very poor eyesight.

He said she enjoys eating handfuls of cereal.

But a piece of metal mixed in with the cereal nearly cut her life short, according to Rossell.

“I just want to report it and let them get it off the shelves,” said Rossell.

"She was eating hers dry and I had milk in mine. She took a grab and said what's this?” said Rossell. "If she would've swallowed that it could have choked her to death. She could have died right there and I wouldn't have known what happened and why. She had it in her mouth.”

What she had in her mouth was a curved piece of metal.

Rossell only has a picture of the metal.

The actual piece of metal has been sent to the Indiana State Department of Health for an investigation into what the piece of metal is and how it got into the box of family gourmet frosted flakes.

It's a brand exclusive to the Family Dollar nationwide discount chain.

"You would think your food that comes from a wholesaler is safe but sometimes things to slip through when it comes from a manufacturing product,” said Rita Hooten, the Food Service Director at the St. Joseph County Health Department.

Hooten said the state Department of Health will determine if this is an isolated case or if the product needs to be pulled from the shelves of Family Dollar.

“When pieces of metal for foreign objects that are not supposed to be in that product, this is how the recalls get started,” said Hooten.

Rossell bought the cereal from the Family Dollar on Edison Road in South Bend.

Before he went to the health department with his concerns, he returned to the store asking for a refund, but they refused. They said he didn't have a receipt and most of the cereal was gone.

"We had had it three or four days before we found that,” said Rossell.

He’s disappointed that Family Dollar wouldn't give him another box of cereal or his $2 back-the cost of the cereal.

"I haven't been back since,” said Rossell.

Especially since on the front of the box it says: “100-percent satisfaction guaranteed or your money back.”

"What if a little kid had gotten a hold of that and swallowed that --they could have died,” said Rossell.

Thank you so much for your interest in Family Dollar.

Please know the safety of our Team Members and customers is our first priority, and we take allegations such as these very seriously.

At this time the Company does not have a record of this complaint, therefore we are not able to comment on this matter at this time.

Please feel free to check in with me for any updates on this matter.