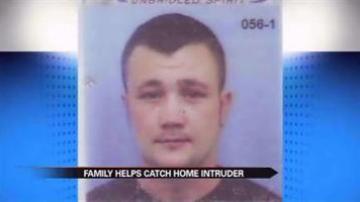 KOSCIUSKO COUNTY, Ind. -- A Kosciusko County couple pulled into the driveway of their North Webster home on County Road 500 Monday night and saw a man inside their home. Before they could leave, the suspect came out of the house and shot at them.

"When we first pulled up in the driveway we noticed all the lights were on in the house and soon as we turned in we seen this pickup truck setting here in the middle of the drive,” said Allen Streby.

The next thing 74-year-old Allen Streby and his 69-year-old wife Kathryn saw gave them chills.

"I saw the person move inside the house, so I told the wife to call 911. She called Craig,” said Allen.

"He had a shotgun in his arms and said, ‘Back up, back up.’ Just like that! And I know and we was backing up because we was getting out of there,” said Allen.

But before they could pull out of the driveway, the man shot at them. He missed them, but hit their car.

"The police have the evidence. They picked the casing up and the hub cap,” said Allen.

Craig Streby, Allen and Kathryn’s son, showed up just as the suspect drove off and followed him.

“I was on with 911 letting them know what roads I were on and following him,” said Craig.

Police took over the pursuit. They said Clevenger led them on a high-speed chase for more than 5 miles.

County officers threw down stop sticks in the area of 150 North and 650 East and Clevenger ran over them. He didn’t stop, instead he abandoned the car and ran into a wooded area.

“Apprehended him with a K-9 unit. He got what he deserved,” said Allen.

Clevenger is being held in the Kosciusko County Jail.

The sheriff's department is suggesting he faces several charges including attempted murder with a firearm.