Family of 7-year-old struck by van in Warsaw speaks 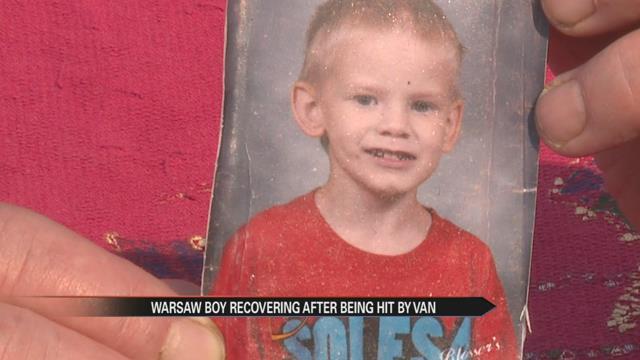 A child was brought to the hospital in critical condition after being struck by a van in Warsaw on Sunday afternoon.

Police say just after 1 p.m. Kosciusko County Sheriff's Deputies and emergency personnel responded to the 700 block of south Warbler Lane where a 7-year-old was struck by a vehicle.

He was immediately transported to Lutheran Hospital in Fort Wayne

“I went straight to the emergency room and I told him grandma’s here. He was so happy to see grandma,”said Mary Richards.

Richards says her grandson David suffered bruised ribs and a partially collapsed lung but is expected to be OK. She says the doctors told her he could be released from the hospital within  a few days.

According to the police investigation 44-year-old Tammy Honeycutt, who lives with the family, accidentally hit the child with her van.

Richards says the boy was in the driveway playing with a toy truck in a mud puddle on the passenger side of the car.

“She got in the van and took off, she run him over. Everybody was just hysterical, you know, it was very upsetting,” said Richards.

Police say Honeycutt thought the child was still inside the home.

“I’m just thankful that he’s still with us today. It’s sad that it happened but it could have been much, much worse. We could be planning a funeral,” said Richards.

Although Richards doesn’t fault anyone for the accident she hopes it will serve as a safety reminder for drivers.

“Always double check. You don’t want something like that to happen to one of yours. Look a little bit more because little kids you don’t always see them,” said Richards.