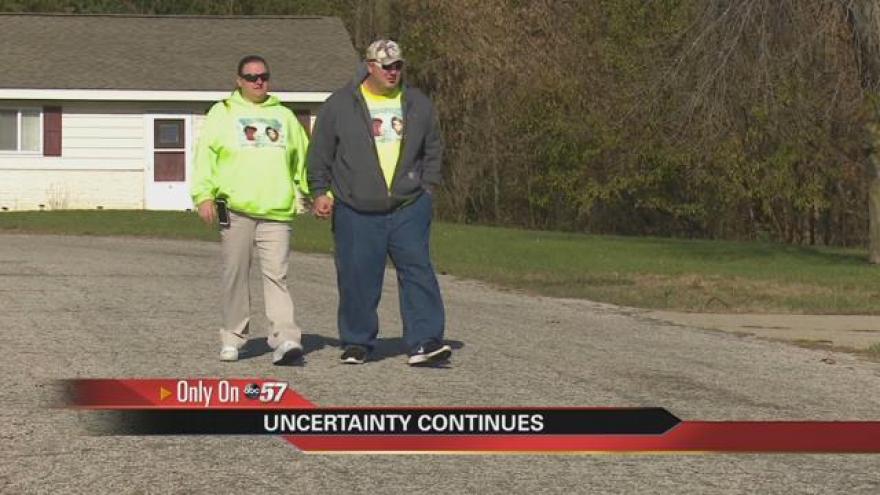 Only on ABC57 – a tearful plea for custody as a Berrien County family continues to cope with the aftermath of a double murder.

“He’s taken my whole family from me,” Stephanie Kopaceski said. “So I need the girls like, like the girls need me, I need them.”

It’s been 10 months to the day since the bodies of Renee and John Mitchell were found in their Coloma home.

Their murders left Renee’s two young daughters without their mother, and their father is behind bars as the suspect.

In an exclusive interview, the victims’ family spoke out for the first time on Monday because they didn’t know who else to go to as they continue fighting for custody of the girls.

“A lot of headache and heartache and wondering, you know, where do we go from here?” Stephanie said.

Stephanie and her husband, Tim, feel so much heartache from January 14, 2016, they still struggle to put it into words.

“I still, to this day, try to overlook the – [long pause],” Stephanie said.

But the couple is reliving it each day, as they fight for custody for their two nieces – 5-year-old Nova and 4-year-old Luna.

“We’re working on 10 months with no contact with the girls,” Stephanie said. “None.”

“No visits, no phone calls, no letters, no nothing,” Tim said. “Just a picture.”

The couple has been sent one picture of their nieces since they were placed in foster care after their father, Alex Perez, allegedly killed their mother, Renee, and their grandfather, John.

Stephanie found her sister’s body in her father’s house the evening after she and Tim buried Tim’s mother, who had passed away in an unrelated circumstance.

Authorities then discovered John was also dead inside his home.

Stephanie and Tim have been trying to adopt the girls ever since.

They canceled a planned move to Alaska – where Tim’s ailing father lives – and unpacked their RV into a new home in Berrien County. They’ve even set up a pink bedroom for their two nieces, complete with beds, a television, clothes, and toys.

“We’ve done everything that they’ve asked us to do,” Tim said.

“And beyond more,” Stephanie said.

“Beyond more than what they’ve asked us to do, and still, it’s like not good enough for them,” Tim said.

The couple said they’ve passed multiple adoption checkpoints, including three home checks, physicals, and fingerprinting. And both of them have an income.

Pictures in their house show they’ve been in the girls’ lives since day one.

But they’re feeling shut out as they try to adopt their nieces. They even said a court order allowing them to visit the girls – which they showed doing the interview – has gone ignored.

When asked what they would like to tell the girls if they see this story from their foster home in Kalamazoo, Stephanie and Tim began to choke up.

“I love ‘em,” Stephanie said. “And I just hope that – I just wanna be able to hold them and hug them and tell them that everything is gonna be ok.”

“This is not the end of the world,” Stephanie said. “I know it’s something that happened and I know it’s hard for them. But, I believe that in all times of counseling and anything, I think that we can all make it through together.”

A representative from the foster care system the girls are currently in was reached out to Monday afternoon, but as of Monday evening, the call has not been returned.

Stephanie and Tim were very transparent from the beginning of the interview – saying they both have minor criminal records (i.e. marijuana charges from years ago), but they have not been in trouble for years. Stephanie also said she’s been told that her record does not disqualify her from adopting.

In addition, Stephanie said she’s confused because back in January – before the murders – she was given temporary custody of her nieces for seven days while her sister dealt with some personal matters.

Stephanie said if she was OK to have the girls then, why isn’t she now?

The Kopaceski's have started a GoFundMe page to raise money for a new attorney as they continue fighting for custody of their nieces. You can donate by clicking here.