Fans, community gather to send Cavemen off to state 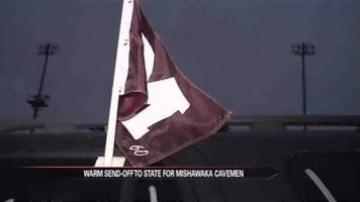 MISHAWAKA, Ind. -- Fans lined up early Saturday morning to send the Mishawaka Cavemen off to Indianapolis for the 4-A Indiana State Championship in football.

At least one former player whose son is quarterback Sam Schrader remembers his time as a player on the Cavemen football team.

Mishawaka played Indianapolis Cathedral.And the mascot for Catherdal is the Fighting Irish.