Fans get to see the Irish, IU Hoosiers practice in Dayton 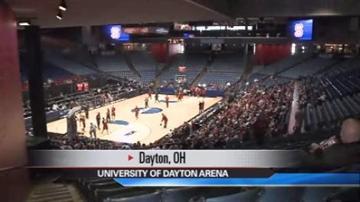 DAYTON, Ohio -- March Madness is officially underway and the road to Atlanta has a few stops in between. For the Irish and Indiana Hoosiers, that means a trip to Dayton, Ohio, where they will play Friday.

Thursday ABC57 attended interviews with Coach Mike Brey and the Fighting Irish players. The team then gets to practice in front of fans.

The fans got to see quite a few teams practice, including the Indiana Hoosiers.

"It's like, the biggest, one of the biggest things in our lives,” said Dale Miller, IU fan.

Indiana fans filed into the University of Dayton arena to get their first glimpse of the number one seeded Hoosiers.

"This year we're definitely following more than previous years because Indiana is doing so well so we're hopeful that they do well,” said Kayla, IU alum.

The seats were packed with red and white, young and old- sizing up the competition and getting pumped for Friday’s game.

"I'm here to just watch a little basketball. I think the dress rehearsal is always a ton of fun to watch and get a feel for the players and how they, the way they play on the court,” said Jodi Tobin, IU fan.

"Get to see them up close and personal, maybe take some pictures and cheer them on,” said Alicia Maney, IU alum.