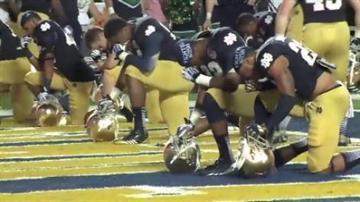 MIAMI GARDENS, Fla. — Before the game clock ended fans were filing out of Sun Life Stadium.

"There's always more and more for the next year so I'm looking forward to it I'm just bummed about it now," said Irish fan Rich Blackman.

Fans circled the exit and poured onto the streets after Alabama blew past Notre Dame 42-14.

For the Tide, they said it they saw it coming.

"I really expected it to be like this Roll Tide," said Alabama fan Dean Hudson.

The Irish did not.

But for both teams, the atmosphere inside the stands does not get any better.

For the Notre Dame family, the were glad to have the support from the people in the stands chanting for them.

"I think the good thing about Notre Dame fans is no matter what the score is, no matter the adversity that hits us, they're always going to be there for you," said Everett Golson. "So, I appreciate the fans."

Even though the Irish have to leave Miami disappointed, there is a lot to look back and forward on for the Irish.