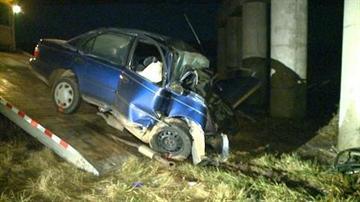 BERRIEN COUNTY, Mich. – A fatal single car accident took the life of Andrew Wuthnow, 23, Sunday evening. Wuthnow was driving east on US-12 when his car left the road and ran head-on into a cement support column of the US-31 overpass.

The accident occurred around 5:30 p.m. and it took crews several hours to investigate and clean-up the crash site.

The damage to the front end of Wuthnow’s car was extensive; completely compressing it into a semi-circle.

While the airbags deployed, investigators say Wuthnow was not wearing his seatbelt and did not survive the crash. “Concrete is really unforgiving, when a car smashes into any type of concrete abutment or support; it doesn’t absorb any energy from the impact so it’s a pretty serious crash,” said Trooper Tim Thompson of the Michigan State Police.

Thompson and his fellow investigators followed the cars tire tracks back to where the car left the road.

Because investigators could not find any indication that Wuthnow lost control of the car, only a few scenarios are possible.

One of those is that Wuthnow may have simply fallen asleep at the wheel and failed to wake up before running into the pillar; another is mechanical failure.

According to Thompson, the roads were clear of ice and it did not appear that Wuthnow was under the influence of drugs or alcohol at the time of the crash.

There was one other car on the road at the time of the accident. The driver of that car told police they could not tell if Wuthnow was awake or not. All they could say for certain is they watched the car leave the road and the break lights never activated before the crash occurred.

Investigators may never know for sure what caused Wuthnow’s car accident, and that can be difficult not only for them but for the family of the deceased. “This is one of the rare accidents that we sometimes deal with when there are a lot of questions and not a whole lot of answers and there is speculation about what causes the crash,” said Thompson.