(CNN) -- A 3-year-old boy's screams alerted his mother that a fire had erupted in their first-floor apartment in the Bronx on Thursday night. The boy had been playing with the burners on the kitchen stove, New York fire officials said Friday. 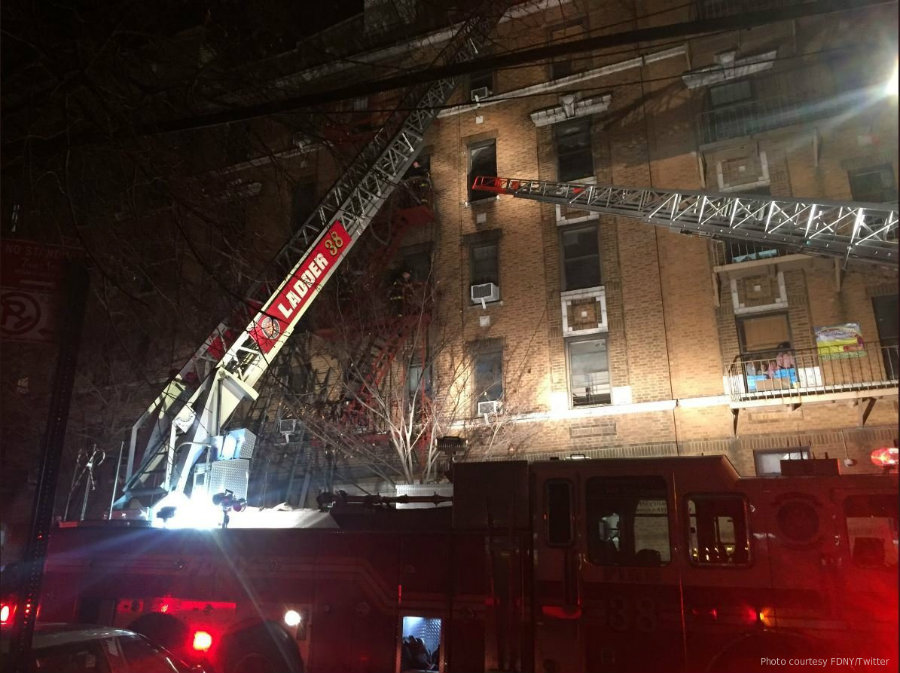 The tragic result was the deaths of at least 12 people, including at least four children, the New York Police Department said.

It was the deadliest fire in New York City in more than 25 years.

The apartment's stairway acted "like a chimney" as the fire burst from the apartment, feeding the flames and allowing them to spread throughout the building, FDNY Commissioner Daniel Nigro said Friday.

The boy in the first-floor apartment had a history of playing with the stove burners, Nigro said. The fire commissioner reminded all New Yorkers of his department's frequent messages emphasizing the crucial step residents must take in the event of a fire.

The fire commissioner said he's unsure whether all the smoke detectors were working in the building.

Records from a city housing agency show one of the apartments on the building's first floor reported defective carbon monoxide and smoke detectors months ago. It's unclear whether those issues were resolved.

Still, Nigro said there was nothing structural about the building that contributed to the fire. The building had a "relatively low history of repair violations," a spokesperson for New York City Housing Preservation and Development said.

Seven civilians and seven firefighters were injured in the fire, according to the fire department. Four civilians were still being treated at hospitals Friday afternoon, with injuries ranging from serious to critical.

Grandmother, baby granddaughter among the dead

Maria Batiz, who New York police said was 58, and her 8-month-old granddaughter were killed in the blaze, her brother Fernando Batiz told CNN.

The baby's mother was not home at the time of the fire because she was working, Batiz said.

Among those who also died in the fire were a 63-year-old woman, four unidentified adult men and an unidentified male child, the NYPD said.

Kwabena Mensah told CNN he believes his 28-year-old son Emmanuel Mensah, a soldier, is among the dead, though there has been no confirmation from police.

"I heard that he was trying to help people out," the father said. "He brought people outside. He came, went back again, and I think on the third time he couldn't find his way out."

Emmanuel, who is stationed in Virginia, was home for Christmas, Mensah said. It was his son's first trip since he enlisted a year ago.

"He wants to help people out," Mensah said of his son. "But like I said, God is in control."

Lights from fire engines reflected on Christmas decorations that still hang around the neighborhood. An American flag floated in the frigid air at a school across the street from the building.

The first call about the fire came at 6:51 p.m. ET Thursday, and the fire department responded within three minutes, Nigro said.

Radio traffic from fire officials responding to the blaze paint a desperate scene.

"Bunch of calls on this one, chief," one official said as units rushed to the Bronx.

Seconds later, the radio blared, "We've got people on the fire escape."

Witnesses also shared harrowing accounts of residents scrambling onto fire escapes to get away from the growing flames.

"People were on the fire escape trying to get down on their own," Kimberly Wilkins told CNN affiliate WCBS. "People were screaming."

Rafael Gonzalez, another witness, said, "All I saw was just kids in the fire escape ... and the flames were still going."

Video from the scene showed one man dressed in shorts trying to help firefighters maneuver a victim on a stretcher away from the building.

The walk-up building contained 29 units, according to public property records. At least 12 people were rescued and are expected to survive, the mayor said Thursday night. By the time officials held a news conference around 10 p.m. ET, the fire had been put out and the building was being searched.

A number of residents gathered Friday morning at the Bronx Zoo Deli, a nearby corner bodega, for coffee, to chat with neighbors and to get a glimpse of the destruction. Ice covered parts of sidewalks near fire hydrants on this frigid morning.

Activity from police and fire department officers cut through what otherwise was a generally quiet residential neighborhood that sits a short distance from the Bronx Zoo, St. Barnabas Hospital and Fordham University.

Joel Rodriguez, 40, was one of the building's residents who made it out alive, and he returned to see whether he could get any of his things Friday morning. He has lived on the first floor of the building for five years, and he said he heard a fire alarm go off on Thursday evening.

"I opened the door and it was pitch black," Rodriguez said.

Adrenaline flowing, he closed the door, went to the window and yanked out the heavy air conditioning unit, "which was amazing because when I was putting it in I was struggling. And it felt like two pounds when I took it out."

He then helped his wife, their friend, and service dog escape through the window. His wife was taken to the hospital for smoke inhalation and was OK, Rodriguez said, but it was "devastating" that other neighbors weren't as lucky.

For now, he plans to go to the Red Cross for some temporary assistance. He couldn't bear to live at his apartment anymore, he said.

"Right now, it's a memorial," he said. "For me, that's like a sanctuary or a memorial."

Rajkumar Ramdhani, who lived with his wife on the second floor of the building, said two grandchildren were visiting from Virginia when the fire broke out.

His granddaughter noticed smoke coming through the door, so they escaped out of the window. The granddaughter was "terrified," he said, and they stayed at a friend's house Thursday night.

Dominic, a neighbor who declined to give his last name, lives across the street and witnessed the building rapidly go up in flames.

One of his friends who lived in the building was taken away on a stretcher from the smoke, Dominic said, and he hadn't been able to contact him since.

The Red Cross and fire department set up a tent with fire education pamphlets next to the corner bodega Friday. The communications officer for the Red Cross, Michael de Vulpillieres, said they gave out blankets, temporary housing, food, drinks and mental health care to residents who needed it amid the "emotional" time.

"Disasters are traumatic even when there's not a loss of life. But when you have this number of people pass as a result of a disaster like this, it's heartbreaking," de Vulpillieres said.

Thursday night's apartment fire in the Bronx is the deadliest in New York City since 1990, when 87 people died in a blaze at the Happy Land social club.

In 2007, 10 people -- nine of them children -- were killed in a fire at a Bronx residence after a space heater cord overheated.

"This is a terrible tragedy in the middle of the holidays. When people are trying to be with their families and have a moment of peace, finally, and having something like this happen to people in the Bronx is just horrible," the mayor told CNN on Friday.

In addition to the reports of one apartment's faulty smoke and carbon monoxide detectors, the city received four complaints about the building since 2004. None of those complaints appears to be fire-related. The latest complaint entered Thursday was from the FDNY requesting a structural stability inspection after the deadly five-alarm fire.