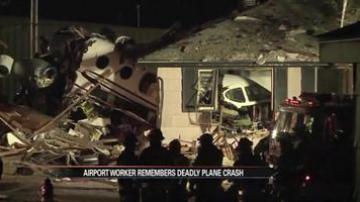 SOUTH BEND, Ind. -- March 17, 2013 a Hawker Beechcraft Premier 1 crashed into three homes on North Iowa Street in South Bend. Two people on the plane were killed, two were injured and a person on the ground was injured. One man who witnessed the crash says he is haunted by what happened that day.

Eyewitnesses said the plane rolled over, did a corkscrew and hit three homes just after 4:30 p.m.

"It still haunts me. I still have the nightmares about it," said Daniel Miller, Line Service Lead Atlantic Aviations.

One year ago, Miller was preparing an airplane for takeoff at the South Bend Regional Airport when he saw another plane coming in quickly.

"Then next thing you know you see an aircraft come in pretty quick, no landing gears down. They were way too fast, really low for that speed," said Miller.

He says the plane almost hit the ground, but pulled back up at the last minute.

"Went right back up, did another pattern and then came back about 5 minutes later," said Miller.

The pilot attempted to land a second time.

"I look over and you see the aircraft skip across the ground, like a rock across water about 4 or 5 times and then it took back off into the air," said Miller.

Miller says that's when it was clear the pilot lost control.

"It was kind of on its side but it was rolling over. That's when I looked away," said Miller.

Miller couldn't see the damage, but he knew it was bad.

"I looked back expecting to see an explosion, thank God the aircraft didn't have much fuel on it," said Miller.

"When you see that kind of aircraft come in anymore, you almost say a prayer for those passengers and those pilots," said Miller.

To this day, he says he has moments where he almost wants to look away.

Jim Rodgers and Chirstopher Evans, passengers on the plane, were seriously injured.

Diana McKeown, whose home was hit by the plane, was injured.