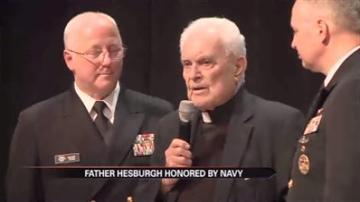 SOUTH BEND, Ind. -- A major honor is being bestowed upon one of Notre Dame’s most well known people. Father Theodore Hesburgh will add another award to his already distinguished career. The US Navy is making him an honorary Navy chaplain.

It's an honor seven decades in the making.

Father Theodore Hesburgh is now an honorary chaplain in the U.S. Navy.

"Every time I had a chance, I spent some time with the Navy," Hesburgh recalls.

Standing 95 years young, the Notre Dame Reverend took to the podium and graciously accepted the honor. He said it's one of the proudest achievements in his life.

"I will continue to serve our Navy as well as our country in anyway possible. Anchors Away."

Those who know him personally said it's well deserved.

"He told me a lot of nice stories and different things he's done," Taniesha Perry, his former cook, said.

She cooked his meals for 11 years and said in that time, she saw first hand how humble he truly is.

"He could relate to me, even though we were from totally different backgrounds," Perry said. "He was just able to talk to me in a common way that you can understand."

And even those who don't know him personally said they know of his legacy on campus.

"He has done so much in the past, and is still so active right now," Erin Marks, a St. Mary's College student, said. "He cares so much, and he's so kind and humble, that he definitely deserves it."

And for a man who holds the world record for the most honorary degrees, this -- is one he'll cherish fondly."