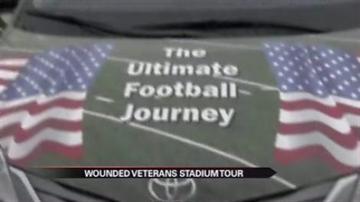 DETROIT — A Chicago father and son had a dream to see every NFL stadium in the country. And that dream later turned into a mission when they brought Wounded Warriors along for the ride.

Craig and Matt Steichen decided to share their tour of stadiums with American heroes.

So far, they have brought Wounded Warriors to all 32 NFL stadiums.

But both the father and son duo and the veterans did not expect the experience to be so emotional.

Next year, the Steichens plan to expand the program by taking soldiers to basketball games, hockey games and even the Oscars.