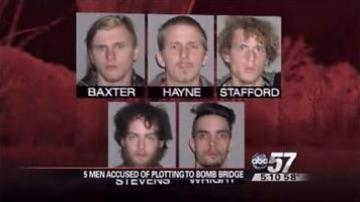 CLEVELAND, Ohio. – Five Ohio men could face up to 25 years in prison.

FBI officials say they were trying to blow up an Ohio bridge. More than 13,000 people drive cross the Route 82 Bridge just south of Cleveland every day.

Monday night, the FBI said the group placed what they thought were plastic explosives at the foot of the bridge's pillars, but they were duds, given to them by an undercover FBI agent.

"The defendants armed the explosives, the defendants left and went to a remote site, and they, then sitting there, entered the codes that they thought would blow up a bridge with innocent people traveling over it,” said U.S. Attorney for the Northern District of Ohio, Steve Dettelbach.