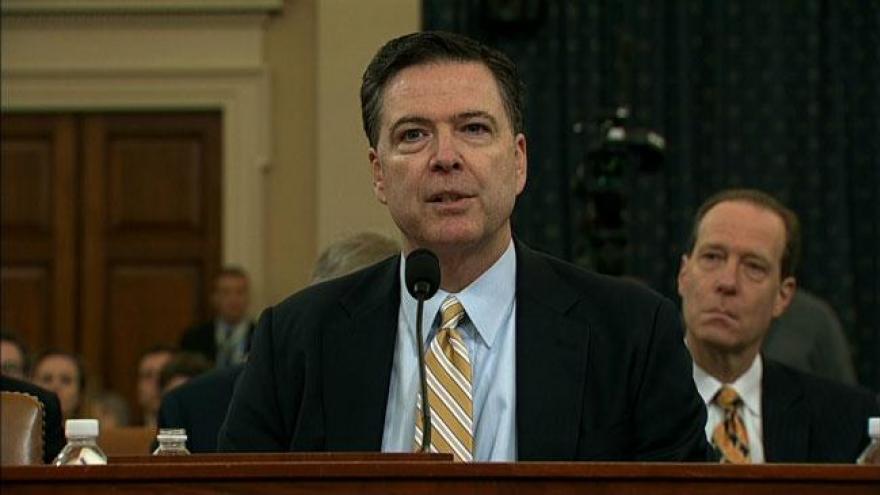 (CNN) -- FBI Director James Comey said for the first time Monday that the bureau is investigating whether there was any coordination between the Trump campaign and Moscow while Russia was interfering in the presidential election.

Comey also delivered an implicit rebuke to President Donald Trump, saying that he had "no information" to support claims by the President that he was wiretapped on the orders of predecessor Barack Obama.

In a dramatic hearing before the House Intelligence Committee, Comey, once again finding himself at the epicenter of a political storm, also said that Russian President Vladimir Putin had a clear preference for whom he wanted to see as the next president -- and it was not Democratic nominee Hillary Clinton.

Comey's comments represented his most explicit intervention yet in the controversy over what US intelligence agencies have assessed was a Russian attempt to disrupt the election -- and a string of counter-claims against the previous administration leveled by Trump himself.

Comey on Monday publicly confirmed for the first time that his agency is investigating possible collusion between Russia and the Trump campaign and whether any crimes may have been committed during last year's election campaign as part of a wider probe into the hacking of Democratic servers and the Clinton campaign.

"That includes investigating the nature of any links between individuals associated with the Trump campaign and the Russian government and whether there was any coordination between the campaign and Russia's efforts," Comey said in his opening statement to the committee.

The hearing, which also featured testimony from National Security Agency Director Mike Rogers saw Democrats highlight publicly available information about links between Trump associates and Russia. Republicans tried to turn the hearing into leaks that led to the resignation of former national security adviser Michael Flynn. Comey testified that US intelligence agencies were agreed that Russia's aim evolved into an effort during the election to aid Trump over Clinton.

"They wanted to hurt our democracy, hurt her, help him. I think all three we were confident in at least as early as December," Comey said.

Comey also said he had no information to support claims by Trump that he was wiretapped by Obama -- made in a series of explosive tweets two weeks ago.

"I have no information that supports those tweets," Comey told the committee, adding that the Justice Department, along with the FBI, had no information to support the allegations. Comey said that no president could order a wiretapping operation against a specific American citizen.

Republican Committee Chairman Rep. Devin Nunes had said the hearing would have several areas of focus -- the extent to which Russian intervened in the US election and whether any campaign officials conspired in those efforts. He restated that there was not a wiretap on Trump Tower, but did not rule out other kinds of surveillance against the Trump campaign. Nunes had also said the hearing would seek information about who leaked classified information linked to the issue or Russian election interference.

Comey was also asked to explain the conclusions of the unclassified report released by the US intelligence community in January that found that Russia had attempted to stir mistrust in US democracy, and had developed a preference for Trump over Democratic nominee Hillary Clinton owing to her stance on Moscow while secretary of state.

"I don't know for sure, but I think that was a fairly easy judgment for the community," Comey said.

"He -- Putin -- hated Secretary Clinton so much that the flip side of that coin was he had a clear preference for the person running against the person he hated so much."

Republicans on the committee pressed Comey on how ousted national security adviser Michael Flynn's name became public, or was unmasked, in news reports about his conversations with Russian ambassador to Washington Sergey Kislyak -- apparently in telephone calls picked up by intelligence sweeps targeting Moscow's embassy.

Flynn's failure to tell the truth about those calls led to the request for his resignation. But Republicans say that the leaking of his name was a criminal act in contravention of laws that mask the identify of US citizens caught up in surveillance operations targeting foreign nationals.

Comey would not talk Monday about specific cases or confirm newspaper reports, but said that leaks about classified activity were "terrible."

South Carolina Republican Rep. Trey Gowdy read out the names of Obama administration officials, including former national security adviser Susan Rice and former Director of National Intelligence James Clapper, asking whether they would have had access to the name of a unmasked person. Comey said that their positions would likely allow them such information but did not comment on the individual cases.

"The felonious dissemination of classified material most definitely is a crime," Gowdy warned.

The top Democrat on the committee, Rep. Adam Schiff, said it was not yet known whether the Russian operation was aided by US citizens, "including people associated with the Trump campaign."

"Many of Trump's campaign personnel, including the President himself, have ties to Russia and Russian interests. This is, of course, no crime," Schiff said.

"On the other hand, if the Trump campaign, or anybody associated with it, aided or abetted the Russians, it would not only be a serious crime, it would also represent one of the most shocking betrayals of our democracy in history."

Schiff related alleged links between people close to Trump and Russia, including his former campaign aide Paul Manafort, using the President's words during the campaign and publicly available information contained in a dossier drawn up by former British intelligence officer Christopher Steele, large portions of which have yet to be corroborated by CNN.

"Is it possible that all of these events and reports are completely unrelated. ... Yes, it is possible," Schiff said.

"It is also possible, maybe more than possible, that they are not coincidental, not disconnected and not unrelated and that the Russians used the same techniques to corrupt US persons that they employed in Europe and elsewhere. We simply don't know, not yet, and we owe it to the country to find out."

Rogers said under questioning from the top Democrat on the committee that there was no information that the Obama administration requested the British surveillance agency GCHQ to conduct eavesdropping on Trump, as stated in a Fox News report that has been cited by the White House. He also said that he had not personally done so.

"No, sir, and nor would I, that would be expressly against the construct of the Five Eyes agreement that has been in place for decades."

Trump tried to shift attention away from the wiretapping claims in a series of Monday morning tweets.

"James Clapper and others stated that there is no evidence Potus colluded with Russia. This story is FAKE NEWS and everyone knows it!" Trump wrote shortly after 6:30 a.m. ET, followed by: "The Democrats made up and pushed the Russian story as an excuse for running a terrible campaign. Big advantage in Electoral College & lost!"

The controversy over the wiretapping claims was unleashed by stunning early morning tweets from the President at his Mar-a-Lago resort in Florida two weeks ago. He drew parallels to Watergate and McCarthyism and said Obama was a "Bad (or sick) guy!" for ordering surveillance of his New York residence -- allegations the former president quickly denied through a spokesman.

Democrats were quick to jump on Comey's remarks to hike pressure on Trump over his allegations, arguing that the President's conduct had "severely damaged" his credibility.

"He should admit he was wrong, stop the outlandish tweets, and get to work on behalf of this country."