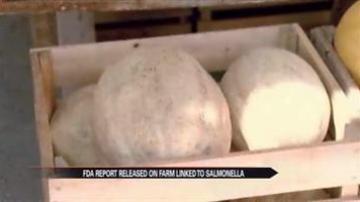 A southern Indiana farm connected to a salmonella outbreak was reportedly unsanitary and unsafe according to a report from the Food and Drug Administration.

The FDA released an inspector's report from August visits to Chamberlain Farm.

The report says the equipment in the farm's fruit packing plant was not cleaned properly. The inspector also found two strains of salmonella, one which was found on boxed cantaloupes.