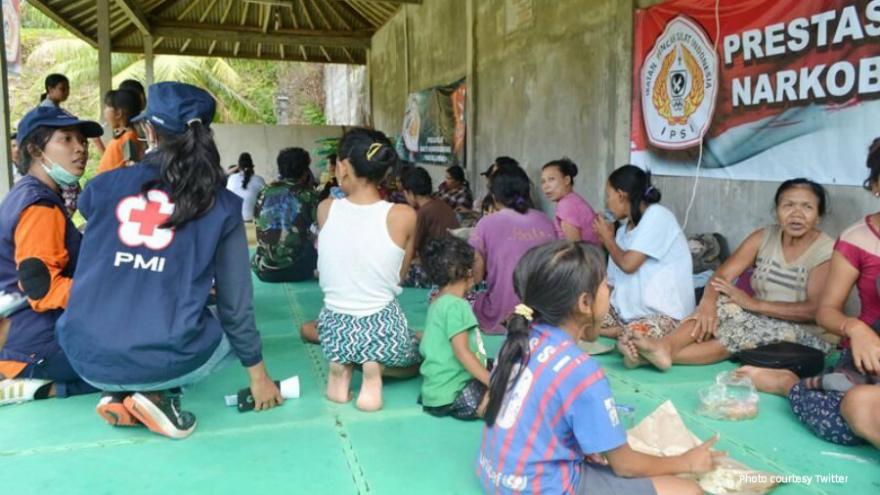 (CNN) -- Thousands of people on the Indonesian island of Bali have been evacuated from their homes amid fears that Mount Agung could erupt for the first time in over 50 years.

A 12 kilometer (7.5 mile) exclusion zone has been set up around the volcano, on the northeastern side of Bali and more than 48,000 people have been evacuated, according to the country's National Disaster Management Agency.

Sutopo Purwo Nugroho, head of the agency, told reporters that 48,540 people were being housed in 301 temporary shelters while attempts are underway to relocate 14,000 others from areas threatened by the volcano. Sutopo added that some villagers are reluctant to leave their crops and livestock.

A level four warning alert -- the highest possible -- is also in place.

Warning banners reading "You're entering active volcanic hazard zone" have been erected at the perimeter of the evacuation zone and hundreds of volunteers have been deployed, according to the International Red Cross.

Seismic activity around the mountain is increasing "and (it) has the potential to erupt," Indonesia's national volcanology center said in a statement. The volcano's danger status was raised to its highest level on Friday.

Bali is a popular tourist destination, particularly for Australians. The country's consulate to the island has warned citizens to avoid outdoor activities in the region of the volcano and to take precautions over air travel.

Mount Agung is around 70 kilometers (43 miles) from Bali's main tourist areas of Kuta and Seminyak.

Aircraft have been advised to avoid the area, but as of Monday morning no flights had been canceled, a spokesman for Bali Airport told CNN.

Nine airports around the region have begun preparations to redirect flights and handle displaced passengers, the Jakarta Post reported Monday.

Bali's tourism board said ferries and other transport links to nearby islands were so far unaffected, but it urged people "to start preparing sufficient stock of face masks in the case of an ashfall."

Almost 2,000 people were killed when the volcano erupted in March 1963, which also destroyed multiple villages around the mountain.