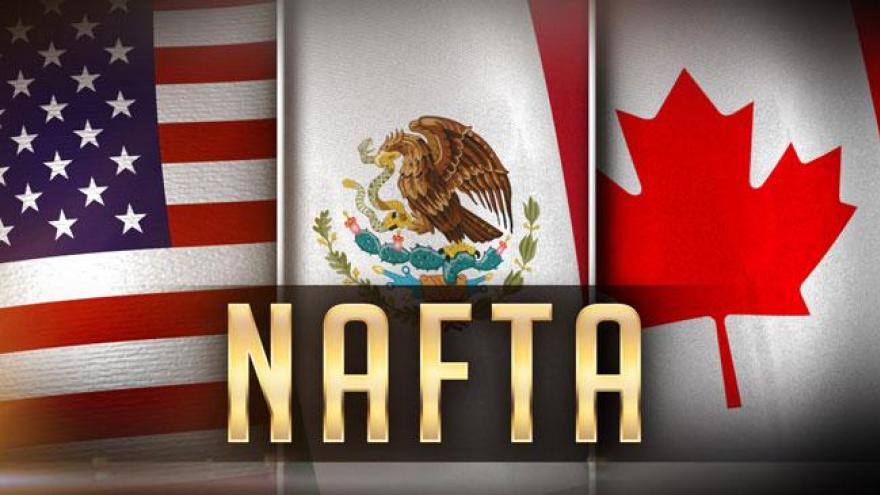 NEW YORK (CNNMoney) -- American businesses that export to Mexico would be hurt if the Trump administration scraps NAFTA.

That's the message Monday in a blog post from the New York Federal Reserve.

It's one of the clearest signs of resistance from within the federal government to scrap the free trade deal between Mexico, the U.S. and Canada since President Trump took office.

Trump labeled NAFTA a "one-sided deal" in January, arguing Mexico has reaped all the benefits while the U.S. has only lost jobs and companies.

Without naming Trump, the New York Fed threw a subtle jab at his threats to potentially withdraw from the agreement -- a view still posted on the White House's website, even though lately, the rhetoric from the administration has gotten softer.

"Often forgotten in the debate about NAFTA are the benefits to U.S. companies," wrote the authors -- Mary Amiti, a New York Fed researcher, and Caroline Freund, a senior fellow at the Peterson Institute for International Economics.

Currently, products flow tax-free across the U.S., Mexican and Canadian borders -- a key product of NAFTA, which has made North America a powerful trading bloc.

But without NAFTA, it could become expensive to export.

Mexico charges an average tariff of 7.4% for imports from countries that aren't part of a trade agreement. The average tariff the U.S. charges to countries it doesn't have a trade deal with is 3.7%.

So, American companies could be paying twice as much as Mexican companies to export across the border. It's a reminder that when NAFTA was signed into law in 1994, Mexico lowered the bar much more than the U.S. had to.

Tariffs vary by product, from avocados to autos. And the governing body of global commerce, the World Trade Organization, has different rules in place for advanced countries like the United States versus developing countries like Mexico.

Under international law, Mexico could impose tariffs by as much as 35% on the vast majority of U.S. exports if it wanted to without a NAFTA agreement. The U.S. could only raise tariffs on Mexican imports to about 4%.

"Even if a WTO dispute settlement panel...rules against the U.S., such a ruling does not automatically lead to a change in U.S. law or practice," according to the office of the U.S. Trade Representative, a unit of the executive branch.

That said, the Trump administration has eased its rhetoric on NAFTA in recent weeks. Commerce Secretary Wilbur Ross even expressed so much optimism in reaching a new deal -- as opposed to withdrawal -- that his comments boosted the value of the Mexican peso one day. For now, withdrawal appears far off.

Ross is expected to soon officially inform Congress of the administration's intent to renegotiate NAFTA later this year.