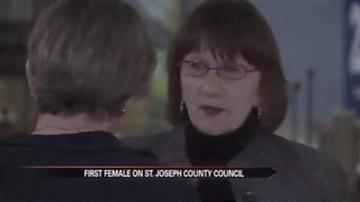 SAINT JOSEPH COUNTY, Ind -- The St Joseph County Council now has a female on the board.

Diana Hess of South Bend won the election. She said it was extra special because the county council hasn't had a female on the board for close to 20 years.

Hess is currently the executive director of Neighborhood Resources Corporation and prior to that she worked at IU South Bend for 20 years.

Kruk won the spot for the St Joseph County Treasurer in the November 2012 election.

On Sunday voters in his district had the opportunity to vote for the four candidates who were running to fill the remainder of Kruk's term.

Hess will fill the position for the next two years.