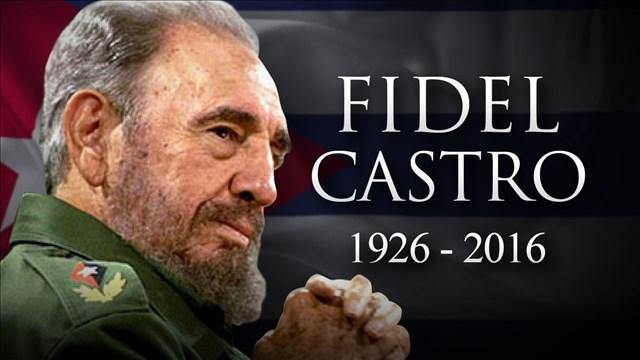 He lives nearby and plans to return Saturday night for a memorial service for Fidel Castro, the former Cuban leader who died November 25.

"He was the most important man in the country," the youngster said of his namesake.

Castro's ashes arrived Saturday in Santiago after a four-day tour across the island nation.

Starting in Havana, the tour reversed the route Castro took across the island after seizing power in 1959. Crowds of Cubans lined the roads and stood on rooftops to watch Castro's funeral cortege pass by.

Thousands of people were expected to gather Saturday night for the memorial, and reporters from around the world have already set up cameras and transmitters at the square.

On July 26, 1953, Castro led a group of about 150 rebels who attacked the Moncada military barracks in Santiago in an unsuccessful attempt to overthrow the dictator Fulgenvio Batista.

Most of the attackers were killed and Castro and a handful of others were captured. The attack made him famous throughout Cuba.

He was sentenced to prison, but he was released early and launched another revolution that succeeded in overthrowing Batista. Castro declared victory January 1, 1959, from the balcony of the Santiago City Hall.

The square honors another Cuban hero, Antonio Maceo Grajales, with a statue 16 meters (52.5 feet) high. He was a statesman and military leader in the Cuban independence movement in the 1890s.

Castro died November 25 at 90, his brother, President Raul Castro, announced on state television. Castro's remains were cremated Wednesday and hundreds of thousands attended a Mass that night in Havana.

The funeral is scheduled for Sunday at the eastern city's Santa Ifigenia Cemetery, with an unlikely mix of world leaders, royalty, Marxist guerillas and Hollywood actors expected to attend.