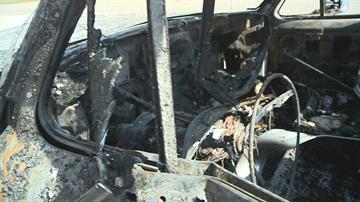 EAU CLAIRE, Mich. - A Stevensville man is recovering from burns that covered 100% of his body Wednesday after a fiery crash in Eau Claire. It happened just before 10 a.m. near the corner of Main and First Streets.

The man, 64-year-old Joe Camp Jr. was transporting charcoal from a controlled burn back to his business, when his truck went up in flames. Camp's pickup truck slammed into two SUVs and the business, Hermel Dye Casting Company building.

Robert Comer says it was about the strangest call they’ve ever gotten at Hermel Dye Casting. “He called his daughter. (She said) 'My dad says his truck is on fire. He says 'get the hoses ready he’s coming down the alley,"” Comer said.

Michigan State Police say Camp didn't get back in time. The fire started in the bed of the truck and worked its way to the cab. They say that is when Camp lost control and hit the building and parked cars. “I just hope he’s okay and God bless.”

Police say 100 percent of Camp's body was covered in burns. He was airlifted to Bronson Hospital. Police say he was responsive after the accident.