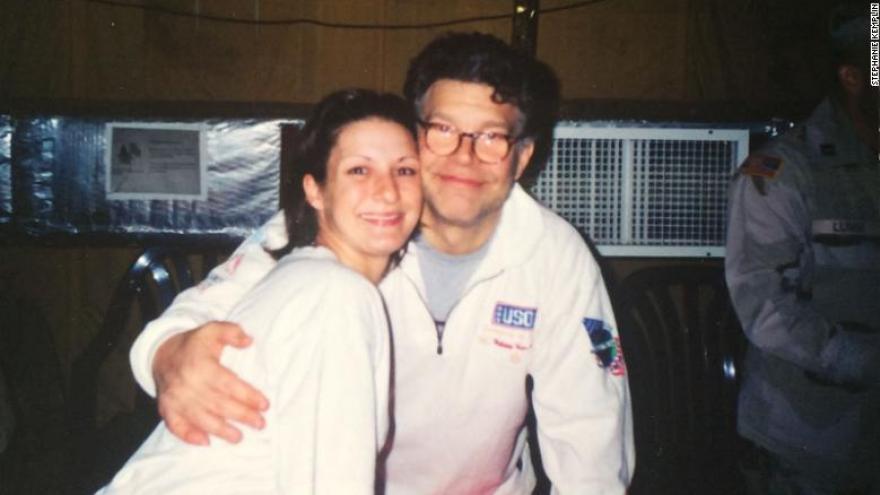 CNN — An Army veteran says Sen. Al Franken groped her in December 2003, telling CNN that while she was deployed in Kuwait, the Minnesota Democrat cupped her breast during a photo op.

Stephanie Kemplin, 41, of Maineville, Ohio, is the fifth woman in two weeks to accuse Franken of inappropriate touching, and the second person to allege that such behavior took place while Franken was on a USO tour. Three of the five women have been identified by name.

Kemplin said while she was stationed in the Middle East during the Iraq War, she met Franken -- at the time, a comedian and writer -- as he was visiting American troops with the USO. A longtime fan of "Saturday Night Live," Kemplin got in line to take a photo with Franken.

"When he put his arm around me, he groped my right breast. He kept his hand all the way over on my breast," Kemplin said in an interview. "I've never had a man put their arm around me and then cup my breast. So he was holding my breast on the side."

Kemplin repeatedly used the word "embarrassed" to describe her immediate reaction at the time.

She added: "It was long enough that he should have known if it was an accident. I'm very confident saying that."

Kemplin estimated that the touching lasted anywhere from five to 10 seconds. She said she eventually turned her body to shift Franken's hand off her breast before the picture was taken.

In a photo shared with CNN, Kemplin -- who was 27 at the time and a military police officer -- is smiling widely with the left side of her face pressed against Franken's right cheek. Franken's right arm is wrapped around Kemplin's back and his hand is on her side at chest-level, and does not appear to be on her breast in the photo.

Looking back at the picture, Kemplin said she recalls feeling frozen and numb: "I did not process it in those split seconds."

A Franken spokesperson told CNN Wednesday night: "As Sen. Franken made clear this week, he takes thousands of photos and has met tens of thousands of people and he has never intentionally engaged in this kind of conduct. He remains fully committed to cooperating with the ethics investigation."

'I just feel so sorry for that young girl in that picture.'

In one of multiple lengthy phone calls with a CNN reporter this week, Kemplin repeatedly broke into sobs.

Kemplin said she did not say anything to Franken at the time.

She also doesn't recall telling any fellow soldiers about the incident afterwards because she felt ashamed and did not have peers she felt she could confide in. But she discussed it with multiple family members and relatives, including her sister, as well as an ex-boyfriend. CNN interviewed both.

Amy Muddiman, Kemplin's older sister, said she remembers Kemplin being excited that Franken was coming to visit because she had grown up watching SNL.

"I just remember her telling me that he grabbed her breast and that she was so shocked about it," Muddiman said. "My sister is pretty bold and assertive and she said that she didn't know what to do."

One of Kemplin's ex-boyfriends was also in the Army and he and Kemplin dated after the two of them returned to the United States. He asked not to be named to protect his privacy. He told CNN that while he did not remember all of the details of what Kemplin described of her encounter with Franken, she said "he went to put his arm around her and copped a feel."

Kemplin's story bears striking resemblance to those of several other women who have accused Franken of groping in recent days.

Lindsay Menz of Frisco, Texas, told CNN last week that Franken grabbed her buttocks while the two took a photo together at the Minnesota State Fair in 2010. The Huffington Post also reported that two women, whose identities were not revealed, said Franken touched their buttocks in 2007 and 2008.

These stories came after Leeann Tweeden, morning news anchor on KABC radio in Los Angeles, revealed that Franken groped and forcibly kissed her during a USO tour in 2006.

Kemplin said when she saw Tweeden's story on social media, she "felt like the rug was pulled out from underneath me" because she had tried not to think about her run-in with Franken in years.

Kemplin reached out to Tweeden two days after Tweeden went public with her story, and the two women spoke on the phone a few days later. In one of their subsequent conversations, Tweeden asked Kemplin if she could connect her with a CNN reporter.

Over the past two weeks, Kemplin also wrote about her 2003 meeting with Franken on Facebook in two posts visible to her friends on the social network. One relative, whose name CNN is not using to protect the person's privacy, commented on Facebook that her husband "remembers you telling him about (Franken) years ago."

Kemplin, who now works as a federal contractor investigating Medicare fraud, is a registered Republican and said she voted for President Donald Trump in the 2016 election.

One reason Kemplin said the Franken news has hit her especially hard in recent days is because she was the victim of sexual assault while serving overseas.

She said she was assaulted by a specialist with whom she shared a tent in 2003, just months before her run-in with Franken. The details of the assault were shared with CNN but are not being disclosed at Kemplin's request.

CNN has also reviewed Kemplin's military records. She was discharged honorably in 2008.

Sean Chambers, the platoon sergeant who oversaw Kemplin while she was deployed in Kuwait, described Kemplin in an interview as a "model soldier" who was honest, friendly and quiet.

Chambers said she confided in him about having been inappropriately touched by a member of their unit, though she did not divulge to him the full details at the time. An investigation was launched into Kemplin's complaint of "indecent assault."

According to documents viewed by CNN, Kemplin was eventually told that while the whole incident was "totally inappropriate behavior," the accused specialist was not guilty of "indecent assault." In addition, she was told that she was "responsible" for having allowed the male specialist to get close to her.

"I was really pissed off. It was not right," Chambers said. "My reaction was: when is it ever the victim's fault?"

He added: "I believe Stephanie. I believe that something did happen. I've seen sexual assault victims before in my line of work and the trauma that they face and there's no doubt in my mind that something happened."

Re-living her encounter with Franken, Kemplin said, has brought up memories of that assault

Kemplin struggled to re-acclimate when she came home from Iraq. Today she suffers from post-traumatic stress disorder and has trouble sleeping. One of her coping mechanisms since the war, Kemplin said, is to "shut down" and block out certain negative memories, particularly when she is feeling overwhelmed. She has described this in the past as a kind of selective "memory loss."

She said she is certain some people will question her story about Franken, because she is only choosing to speak out years later: "Nobody wants to believe anybody if you don't immediately stand up and say something."

Franken has repeatedly apologized about behavior that he said "crossed a line" for some women. The second-term senator has also said that he has taken thousands of photos with people over the years and that while he doesn't remember specific pictures or campaign events, any inappropriate behavior was unintentional.

Franken faces a potential investigation under by the Senate Ethics Committee, and has said he will fully cooperate with the probe.

In a news conference on Capitol Hill this week, CNN asked Franken why he was unable to answer the question of whether more women could come forward with allegations of sexual harassment.

"If you had asked me two weeks ago, would any woman come forward with an allegation like this, I would have said no," Franken said. "And so I cannot speculate. This has been a shock and it's been extremely humbling. I am embarrassed. I feel ashamed."