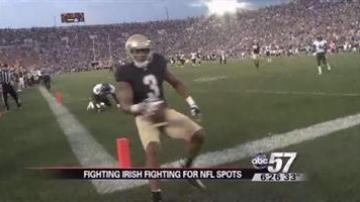 INDIANAPOLIS -- The top prospects for the NFL draft are in Indianapolis, and six of them used to play for the Irish!

The NFL Scouting Combine officially got underway at Lucas Oil Stadium on Wednesday.

Players are evaluated by coaches and general managers. It is the final step many of them will take in making their dreams for playing in the NFL a reality.

There were some the big Irish names among the more than 300 athletes in attendance -- Michael Floyd, Harrison Smith, and Jonas Gray.