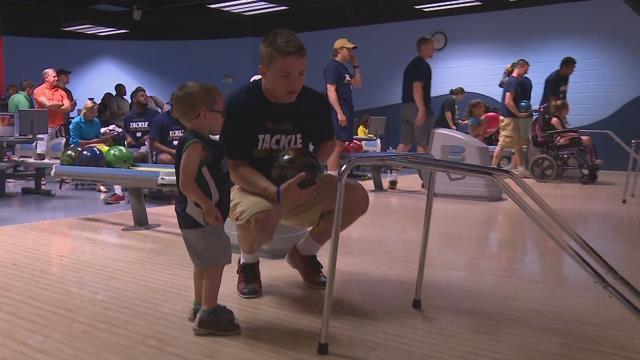 A heartwarming story in Michiana this weekend, as Notre Dame Football players joined children with rare diseases at an annual bowling event to raise awareness.

Dickson and her son were bowling for a cause Sunday morning, alongside the Fighting Irish.

“Bowling is like embedded in the culture of our team,” Irish Safety Drew Recker said.

The goal is to help raise awareness for the rare disease community.

“When you’re put into a position as a Notre Dame Football player, you have an opportunity to do a lot of different things that can impact your community, and this is one that I take pride in,” Irish Quarterback DeShone Kizer said.

Players joined children battling rare diseases for a morning filled with laughter, some competition and a few photo opportunities.

“[We] just really want to use our platform to make a difference,” Recker said.

And the Irish are making a difference, allowing children like Randal – who has Angelman Syndrome – to be actively involved in something fun.

“It lets the kids feel like they get to interact and do more than just watch other kids do it,” Dickson said.

Randal was all smiles Sunday morning.

Mike Williams, a Make-A-Wish volunteer who made Randal’s trip to Sunday’s event possible, said getting Randal and the other kids to the event made it all worth it.

“He’s got a mind,” Williams said, speaking of Randal. “Physically, he may not be where he needs to be, but his mind is, and everything he’s taking in, he just enjoys it!”