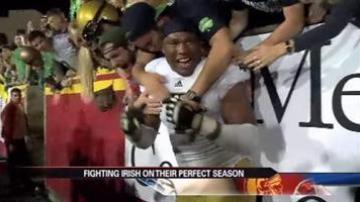 LOS ANGELES – “The National Championship” are the three words Irish defensive end Stephon Tuitt screamed as he walked up the tunnel leaving the Los Angeles Memorial Coliseum on Saturday night.

And he wasn’t alone.

As fans chanted “we’re going to the ship” the players were still trying to let their 22-13 win over USC and everything that comes with it sink in.

“I haven’t really grasped the whole situation, what can I say, we’re going to Miami,” said running back Theo Riddick.

Saturday’s win, along with the eleven before it, is sending the team to Miami to play in the BCS National Championship.

Head Coach Brian Kelly said they did it by doing what the Irish have been doing all season.

“We minimized the big plays, we ran the football, and our quarterback was able to manage the football,” said Irish Head Coach Brian Kelly. “For us that’s how we played the game all year. This was another clear indication of how we got to 12-0,” he added.

The team, all of them, is what got the Irish to this point.

Running back Theo Riddick rushed for 148 yards and scored Notre Dame’s only touchdown of the game in the first quarter.

Kyle Brindza added the rest of the points to the board. He had 5  field goals which took his season total to 23, breaking Notre Dame’s record for most field goals scored in a single season.

The linebacker had five tackles in the USC game and fueled the Irish energy level with an interception just 54 seconds into the second half.

His performance against USC is creating even more hype over Te’o’s shot at the coveted Heisman Trophy.

“Manti for Heisman for sure,” said defensive end Kapron Lewis-Moore. “I think he deserves it. I think he’s the best player in the country and I think he showed it tonight and all year,” he added.

On Jan. 7 Notre Dame will face another top team in the country to fight for the national championship.

Now that they’ve booked their trip the work isn’t over just yet.

“When we start clicking in the red zone we’re going to be really good,” said Kelly. “We’ll have plenty of time to work on that leading up to the national championship.”