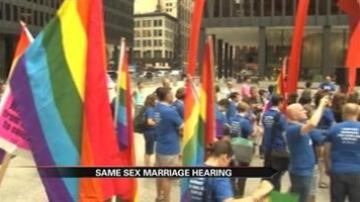 Neither of these SOTs make sense. I don't understand what they're trying to say. I'm sure this is what aired, but it makes absolutely no sense. If you read it and it doesn't make sense, don't feel obligated to post.

CHICAGO, Ill. – The Federal Court of Appeals is still hearing both sides of the debate of same-sex marriage debate.

In a combined hearing for the states of Indiana and Wisconsin, the panel of judges will decide if it is constitutional to ban same-sex marriage.

“Indiana has put forward only one proffered state interest, and that;s this notion that marriage is necessary to protect children that are procreated accidentally by different sex couples, and the court wasn’t buying it all,” says opponent Camilla Taylor.

“These judges obliterated the state of Indiana’s arguments against us. Our son, in the middle of these arguments, wrote us this note that says it best, and it says he’s getting cornered, referring to Tom Fisher. And it also says he can’t think of what to say, so he’s just throwing out words. And that’s exactly what it boils down to, there is no argument against our family,” says Henry Greene, in support of getting the law changed.

Both sides have passionately pleaded their cases, and ABC 57 will keep you up to date on the outcome.