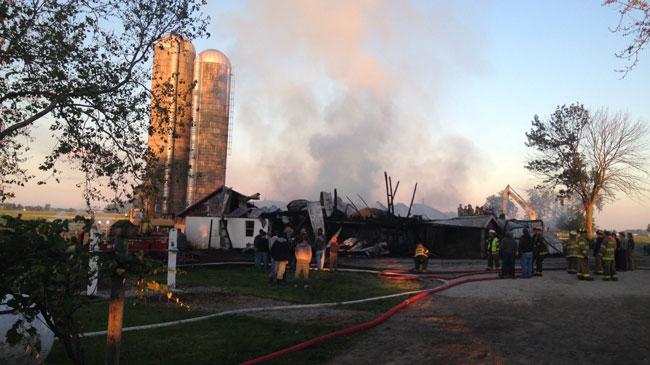 Fire crews were called to a barn fire at a Wakarusa dairy farm around 4:30 a.m. Wednesday.

The barn on the property was destroyed by the fire.

Fire officials say there were dogs, horses and cows inside the barn when the fire broke out.

Several horses and dogs died in the fire.

According to officials, the cattle made it out safely.

The farm's owners are part of a local Old Order Mennonite Church. Other members of the church showed up at the scene to clean up what was left of the barn and offer moral support to the owners.

The owner didn't want to speak on camera, but his friend did.

"He said he had no idea what started the fire," said Aaron Zimmerman, a friend of the owner of the barn. "The church here doesn’t have any insurance so they just come together and help each other out when catastrophe happens," said Zimmerman.

Zimmerman says the owners will rebuild.

"They plan on rebuilding as soon as they can," said Zimmerman.