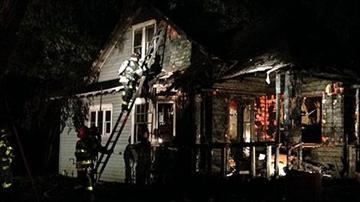 Firefighter say a man was inside the home at the time but got out before they arrived on the scene.

ABC57 talked with the man who was inside the home at the time of the fire.

He says he was housesitting for his brother-in-law and had some people over at the house. That is when he says a woman he knew came by and wanted to come into the house. He refused to let her in. That's when he says the woman lit the house on fire.

And investigators say they haven't ruled out arson.

According to the battalion chief, this was a big fire that could have spread quickly.