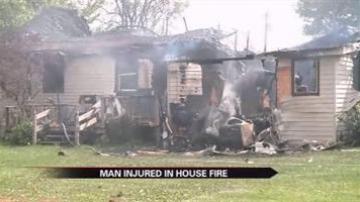 TIPPECANOE, Ind. -- A Marshall County man is fighting for his life after flames ripped through this Tippecanoe home destroying nearly everything in its path!

Investigators are left searching for answers.

Volunteer firefighters raced from their day jobs to the fire late Thursday morning.

When they arrived, the roof was already caving in to the building.

They called for help and got it from the neighboring communities of Bourbon, Argos, and Mentone.
The flames were so big, they could be seen from the sky!
Captain Michael Walters with the Tippecanoe Fire Department says the fire was a tough one to fight.
"Kind of like family around here, you know, everybody knows everybody.  I mean, not everybody knows everybody, but you want to help everybody out and make sure everybody is safe," said Captain Walters.
The owner of the home is Jason Oldham.
He was pulled out of the home and flown to a burn unit in Fort Wayne.
So far, no word on his condition.
Share this article: