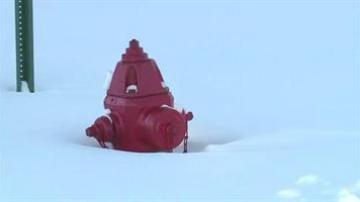 MISHAWAKA, Ind. -- Across Michiana several fire hydrants are covered in snow. One local Fire Marshal says fire hydrants buried in snow poses a serious danger to those who live or work nearby.

She’s talking about the one visible fire hydrant at the West Jefferson apartment complex, and how it is covered in snow.

Firefighters say they’ve been seeing a lot of that lately.

“Responding fire departments, if they can locate the hydrant and they still have to dig it out, that means that someone who may have been assigned to an additional task of doing some more search and rescue and fire attack, now has to be tasked with digging out the hydrant,” said Clay Territory Fire Marshal Dave Cherrone.

And driving just five minutes through the Indian Lakes apartment complex, there were several fire hydrants not up to code, which requires a 3-foot-space be maintained around the circumference of the hydrant.

The Fire Marshal says when fighting fires every second counts, so when they come across hydrants buried in the snow, that can slow down their response time.

So ABC57 asked Indian Lakes why so many fire hydrants had not been cleared.

They said they are currently working to clear them all, but the weather has put them behind.

Cherrone  says every single hydrant needs to be readily accessible at all times.

“No one puts in more than they need because they’re pretty expensive so that means each one is crucial to being used to fight a fire in those buildings,” said Cherone.

“I think they’re doing everything they can, but they can’t work with what they can’t see,” said Burns.

The Fire Marshal says if you notice a covered hydrant on your property make sure to clear it of snow, and if you live in an apartment contact your maintenance office as soon as you can.