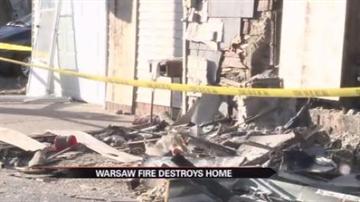 WARSAW, Ind. -- A family of six is homeless in Warsaw after a fire ripped through their home.

The family of six who lives in the house was not home when the fire started.

“We were just really shocked to see everything, because when we left the house everything was fine and when we came back there were firemen and police everywhere,” said Ariella Malagon.

Malagon says when she and her brother returned home from going out to dinner, she could not believe her eyes.  Her neighbor's house had caught fire.

“I saw a whole bunch of smoke,” said Malagon.

“There was smoke coming from the house and from every floor,” said Warsaw Fire Battalion Chief Ed Kipker.

Firefighters managed to get the fire under control quickly but not before doing extensive damage to the home.

“We have to get the hot gases out so that we do not have explosions or put our firefighters in danger so we will do a lot of ventilation holes,” said Kipker.

Firefighters say the fire started in the basement and it appears to have been electrical but they can’t say for sure until the fire investigation is complete.

Neighbors say this isn’t the first fire they have had in the neighborhood recently.

“There was another house that caught on fire,” said Malagon.

With all the old homes in the area, they do not think it will be the last.

Malagon says she is sad that her neighbors lost their home, but she says she is thankful they still have their lives.

“I think that is such a blessing, because if there was anyone in there it would have been really sad,” said Malagon.

The Red Cross is providing shelter, food, and clothing for the family.