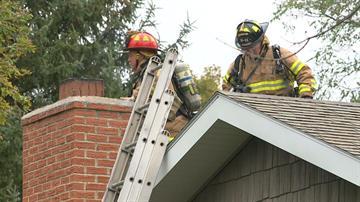 SOUTH BEND, Ind. – A fire might be a nice way to stay warm as temperatures drop in Michiana, but some homeowner’s in South Bend found that it’s a good idea to get your chimney checked first.  Clay Fire Territory crews were called to put out a chimney fire on the 17000-block of Cobblestone Court Tuesday afternoon.

"I was watching a movie on television, had the fire going, thought a jet had landed at South Bend Regional,” described homeowner Denise Neal.  “Heard a lot of, sounded like jet noise, and then the fire alarms started going off."

Neal described a deafening roar that shook her house.  With the alarms going off she first checked the fire in her fireplace.

“The fire looked perfectly normal, like a normal fire,” she described.  “But, I heard this horrific noise up in the chimney."

She grabbed a phone and went outside as she dialed 911.

Firefighters were on scene in minutes and quickly figured out what had caused the fire.

“Upon investigation, basically, we found a dirty chimney and we removed the fire from the fire box and the chimney fire went out,” explained Battalion Chief Keith Kwieran.

With temperatures dropping, fire crews have been bracing for calls about chimney fires.

"The creosote that builds up from burning a lot of wood creates a coating on the inside of that (chimney) liner and when it reaches its ignition temperature it takes off,” Chief Kwieran explained.  “The fire gets so hot it actually ignites all that lining."

The roar Denise Neal said she heard is a normal part of chimney fires.

"Usually when the fire ignites in the chimney it'll actually kind of rattle the chimney and you'll hear it into the fire place itself," Chief Kwieran described.

There are simple solutions that need to be taken before lighting your first fire of the year that can help avoid chimney fires.

"Have your chimney inspected,” Chief Kwieran explained.  “It's getting cold, so people are going to start having their fires at night, have it checked out by somebody certified and that way you're safe."

Kwieran added that you should also have your chimney cleaned at least once a year, twice if you use your fireplace regularly.

“That’s something my husband and I have talked about many times because we do burn a lot of wood every year,” Denise Neal explained.  “We’ve lived in this house for 22 years and it’s something we were conscious of.”

Neal explained that they do check and clean their chimney often.

"We are very cautious about how we have fires,” Neal explained.  “It seems to me that no matter how careful you are and how well you're prepared stuff happens."

No apparent damage was done to Neal’s house, she says she’s thankful for the quick response by firefighters.