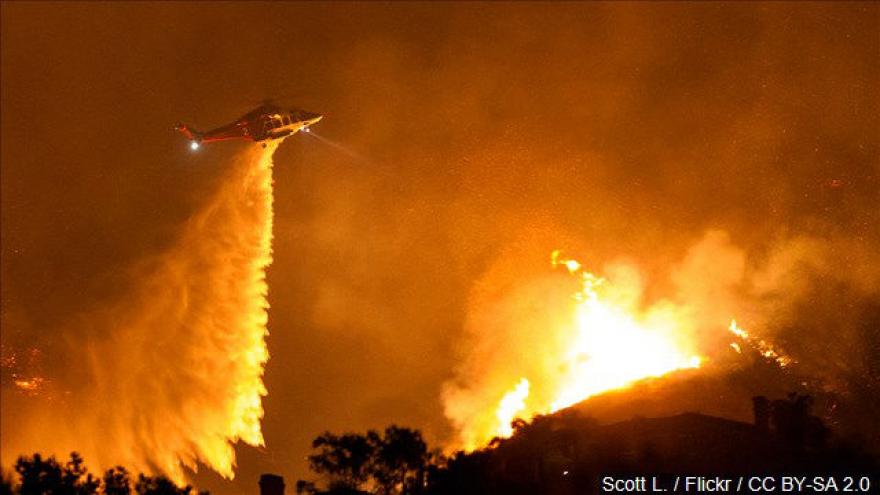 Crews had the 7,000-acre blaze under 30% containment by Sunday evening -- up from 15% containment earlier in the day.

And Interstate 210, a major traffic artery in Los Angeles, was reopened Sunday after being partially closed since Friday because of the La Tuna fire.

California Gov. Jerry Brown issued a state of emergency for Los Angeles County on Sunday due to the ongoing fire, with his declaration allowing state personnel and equipment to be used in fighting the fires, at the direction of the California Office of Emergency Services.

The Los Angeles Fire Department said in a statement 8 p.m. local time (11 p.m. ET) Sunday that the fire was 30% contained. All mandatory and voluntary evacuations had been formally lifted, it said, and the section of interstate closed due to fire and smoke had reopened. Four firefighters had non-life-threatening injuries.

More than 1,000 firefighters from the immediate region and throughout California are battling the fire, which has destroyed three homes and damaged one other, Los Angeles Fire Department Chief Ralph Terrazas said during a press conference Sunday. Burbank is in Los Angeles County.

There are 206 fire engines and nine helicopters dedicated to fighting the fire, Terrazas said.

The fire started Friday and tore through the La Tuna Canyon Park area of the Verdugo Mountains, the Los Angeles Fire Department said.

Los Angeles Mayor Eric Garcetti signed a declaration of local emergency on Saturday that instructed all city agencies to "take all necessary steps to protect life and property in the area" affected by what is now the largest fire the city has ever seen.

"The La Tuna Canyon Fire is an emergency that requires all available resources to protect our residents and keep our homes and other structures out of harm's way," Garcetti said in a statement on Saturday.

Rain on Sunday was a mixed blessing, Terraza said, as it brought much needed moisture, but also strong winds that have blown the fire around.

At least 100 firefighters who were sent to Houston to help in Hurricane Harvey recovery efforts were heading back to California to help with the fire, Terrazas said.

According to Terrazas, it is the largest fire, by acreage, that the Los Angeles city area has ever seen.

Hot temperatures and high winds through the weekend in the Los Angeles area contributed to the "large plume growth and extreme fire behavior," the National Weather Service office in Los Angeles said.