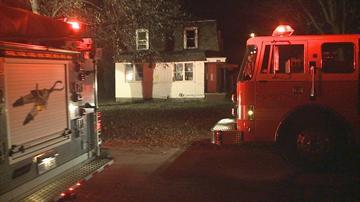 BENTON TOWNSHIP, Mich. – Flames shot out of windows of a home on the 1100-block of Thomas Avenue at around 8 p.m. on Thursday night and firefighters are calling the fire suspicious.

Benton Township Fire Fighters were called to the scene after neighbors saw flames burst out of a second-story window of the vacant home.

“We had just pulled up and we saw a light on, or it looked like a light, and we’re like, no one’s been there in over a month  and then all of a sudden the window broke open and flames started coming out and I called 911,” described neighbor Kelly Lancaster.  “It was just pop and then we heard the outside window frame hit the ground.”

Firefighters arrived and found flames tearing through the attic and one of the rooms on the upper level of the house.  They were able to put out the fire without any injuries, but as of late Thursday night they were unable to pinpoint what sparked the fire.

“The cause is still under investigation right now, we’ve dug some ourselves,” explained Lt. James Fogarty of the Benton Township Fire Department.  “We’re waiting for the arson investigator to show up and he’ll do a little further investigation.”