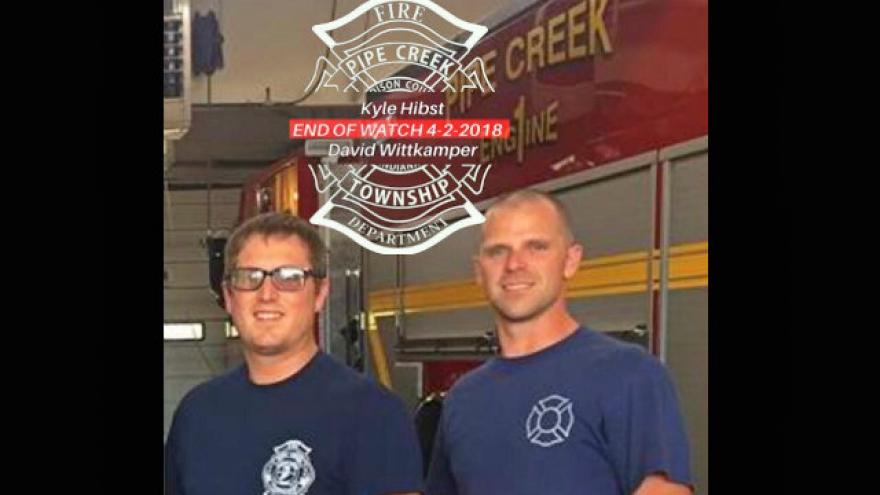 (CNN) -- Two firefighters died when their light aircraft crashed into another plane at an Indiana airport, authorities say.

"A single-engine Cessna 150 collided on the ground this afternoon with a Cessna 525 CitationJet at Marion Municipal Airport in Marion, Indiana," the FAA said in a statement about Monday afternoon's incident.

Marion Municipal Airport does not have a control tower, meaning pilots must communicate via radio, a pilot who keeps his plane at the airport told CNN affiliate WRTV.

Both Wittkamper and Hibst were married and had strong connections to the Pipe Creek firefighting community, the Pipe Creek Township Fire Department said in a statement.

Hibst had been a firefighter since 2011 and also served as EMS chief for the department, of which his wife was also a member. He leaves behind a young son.

Wittkamper's father and grandfather were past members and he had been a firefighter wince 2007. "David (Wittenkamper) grew up with the firefighters as his family," the department said.

WRTV said both men were aged 31 and from Elwood.

"Chief Richard Shepherd is saddened by the loss of these two great individuals who have given so much back to their family, community and this fire department. The members of the Pipe Creek Fire Department are all at a loss as they come together to help each other thru this difficult time.

"Chief Shepherd is grateful for the outpouring of support from the emergency services in Madison County. Please respect the privacy of our firefighters, and the families who have lost loved ones tonight," the statement concluded.

The department posted a tribute on Facebook early Tuesday, with a black band across its logo.

"It is with great sadness and sorrow we announce the passing of two of our own," it said. "Fire Fighters Kyle Hibst and David Wittkamper were taken from us due to a aviation accident yesterday afternoon. Words cannot express the pain and loss each of us feel. Our hearts go out to both families involved. Rest Easy Brothers we will take it from here.."

The FAA said its investigators were traveling to the scene and that the National Transportation Safety Board would be in charge of the investigation.