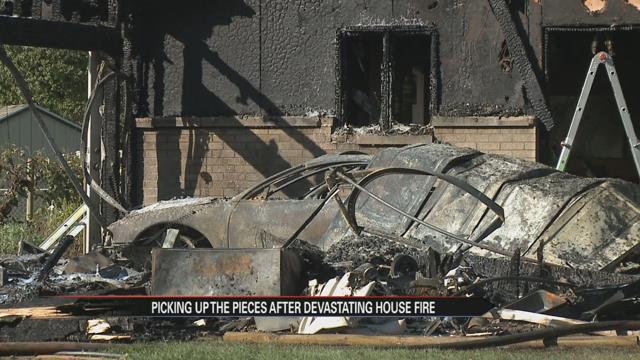 On Sunday morning, around 8:30, Cleveland Township Fire Department was called to the 28000 block of Ella Drive in Elkhart. The cause of that fire remains unknown and luckily no injuries were reported.

The owners are glad the wife, who was inside the house, was able to make it out with no injuries.

The husband said that when he parked a block away and started walking toward the fire he was in denial it was his house, until he found himself standing here.

Michael Graham, the Assistant Chief at Cleveland Township Fire Department suspects the fire could have started in the garage.

“At our first engine’s arrival the garage was pretty well involved and an extension of the house itself,” says Graham. “There’s a good possibility it did start in the garage because of the significance of the damage.”

The fire extended into the kitchen, which they were able to control, but now there’s smoke and water damage through the whole house.

Flames were not the only issue here. When fire crews arrived they were faced with lack of water.

“Our biggest problem that we had was because of the location, trying to get water to the fire,” Graham said. “It’s one of those sub-divisions that doesn’t carry water so we had to get water in from other departments.”

Once the water was in the truck engines, they were able to knock out the fire pretty quickly.

Carl Smalley, who lives across the street, says he’s never seen something so close to his house.

“There were three fire companies here and they were all putting it out,” he said. “It was blazing pretty good for a while.”

Smalley has known the owners of this house for 13 years and says the owners are a bit lucky.

“It’s a nice day. They’re not out in the cold right now. They’re also lucky it didn’t happen during the night,” said Smalley.

Fire crews were sifting through debris to try and find any evidence that could lead them to the cause of this fire, which could take up to a day to get answers.

Around 6:30 pm, Smalley's wife called the fire department because smoke was escaping through the roof. When the firefighters got there they said it was probably just insulation not put out completely.