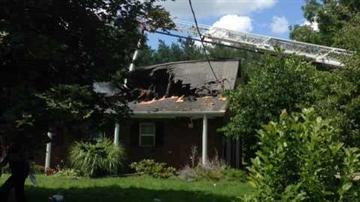 The family got out of the home safely.

Dozens of firefighters fought the flames in nearly 90-degree heat. The heat took its toll on some of the firefighters.

"We did have three firefighters treated for heat exhaustion. They are going to be fine, everybody is going home today, they received some IV fluids on the scene,” said Chris Oginsky, Chief of Lapaz-North Township Fire Department.

The area doesn’t have fire hydrants so more than 40 vehicles brought water to the scene.

Crews got their water from a tank constructed on scene.

"Each of the tankers drop their water into it and it gets sucked up to assist with putting the fire out so that's another battle,” said Oginsky.

Tankers had to drive between 5 to 8 miles each way to fill up.

Firefighters also had trouble breaking down walls to get into the attic as the fire spread.

"Some of the inside furnishings played a factor in the extinguishment [sic]. The crews had a hard time accessing the attic space to get the fire out,” said Oginsky.