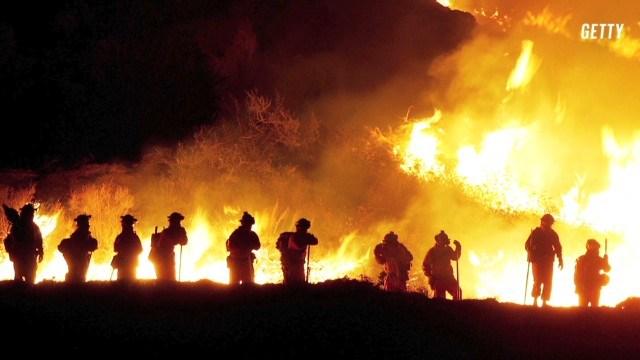 (CNN) -- Fanned by strong winds and the Southeast's worst drought in nearly a decade, at least 14 fires burned in and around Gatlinburg, Tennessee, forcing evacuations from the popular tourist gateway and nearby communities.

"If you're a person of prayer, we could use your prayers," said Gatlinburg Fire Chief Greg Miller said Monday evening as crews battled wind gusts of up to 70 mph.

On Monday afternoon, a wildfire from the Great Smoky Mountains National Park spread rapidly into communities around it. By early Tuesday, emergency officials said about 100 homes were affected by the blaze.

Flames blew into Gatlinburg, scorching at least 30 buildings in the city, including a 16-story hotel and an apartment complex. The fire was also near the edge of Dollywood, the theme park owned by Dolly Parton in Pigeon Forge.

There were no deaths reported, according to the Tennessee Emergency Management Agency. But a male evacuee reportedly suffered burn wounds and an accident involving a fire truck may have also caused minor injuries, the agency said.

Authorities issued evacuations from Gatlinburg and nearby areas, including the north end of Pigeon Forge: "Nobody is allowed into the city at this time. If you are currently in Gatlinburg and are able to evacuate ... evacuate immediately."

But some people, including guests at one Gatlinburg hotel, could not safely evacuate as the fire advanced.

"I just see fire everywhere," said Logan Baker who had checked into the Park Vista Hotel on Monday. The fire swept up to the hotel parking lot, he told CNN affiliate WATE. He posted videos of the hotel doors and windows glowing from the fire looming outside.

Baker was among the dozens of guests who couldn't leave because falling trees engulfed in flames had blocked the only road out.

"We can't go outside. The firefighters said the wind is blowing at 80 miles per hour and the debris in the air is too hard to get us down right now," he said.

The fire had not reached the hotel, but smoke and embers had permeated the building, making it hard to breathe, he said.

But Baker said he felt safe so far. He said he could see downtown Gatlinburg "just engulfed" in flames with cabins on the hillside on fire.

Evacuations in the area

Due to continued erratic winds, the fires are very unpredictable and more fire growth is expected. pic.twitter.com/BYd9ANQeT4

At Dollywood, the park also evacuated guests from its resort and cabins. The property had not suffered any damage as of late Monday night and its crew was working to protect the park areas, said Pete Owens, director of media relations at Dollywood.

The flames proved unpredictable even for authorities as the fire blew into downtown Gatlinburg, forcing authorities to evacuate their original command post at City Hall, said Dana Soehn, spokesperson for the National Parks Service. She was uncertain of the condition of City Hall.

The National Guard was activated to help with the fire fight and evacuations.

This was just sent to us by a friend in Gatlinburg. This is on Airport Road up by Sidney James Lodge. pic.twitter.com/xhrgtqj6el

Several roads were closed because of fire danger, stemming from dangerous weather conditions, falling trees and downed power lines. Authorities asked people who have not been instructed to evacuate to stay off the roads as evacuees crammed the streets to get to safety.

Among them was Bill May, the executive director at Arrowmont School of Arts and Crafts in Gatlinburg. He posted on Facebook late Monday that several of the school's buildings had burned, but thankfully all personnel were safe.

"It is raining and winds have died down which offers hope, but the resources are stretched too thin with this much fire everywhere," he wrote.

Several evacuation shelters opened as about 1,200 people stayed overnight at the local community center and park. Schools in Green, McMinn and Sevier County have been closed Tuesday.

Meanwhile, more than 12,000 people in Sevier County were without power as of early Tuesday morning.

There may be some good news: Rain moved into the area.

It arrived in the mountains late Monday night moving into east Tennessee.

But with rainfall, came some bad news.

"Unfortunately, some wind gusts will accompany this rain," noted the National Weather Service.

High winds are possible across eastern Tennessee, southwest Virginia and southwest North Carolina, according to the National Weather Service. They could down trees and power lines and fan the flames.