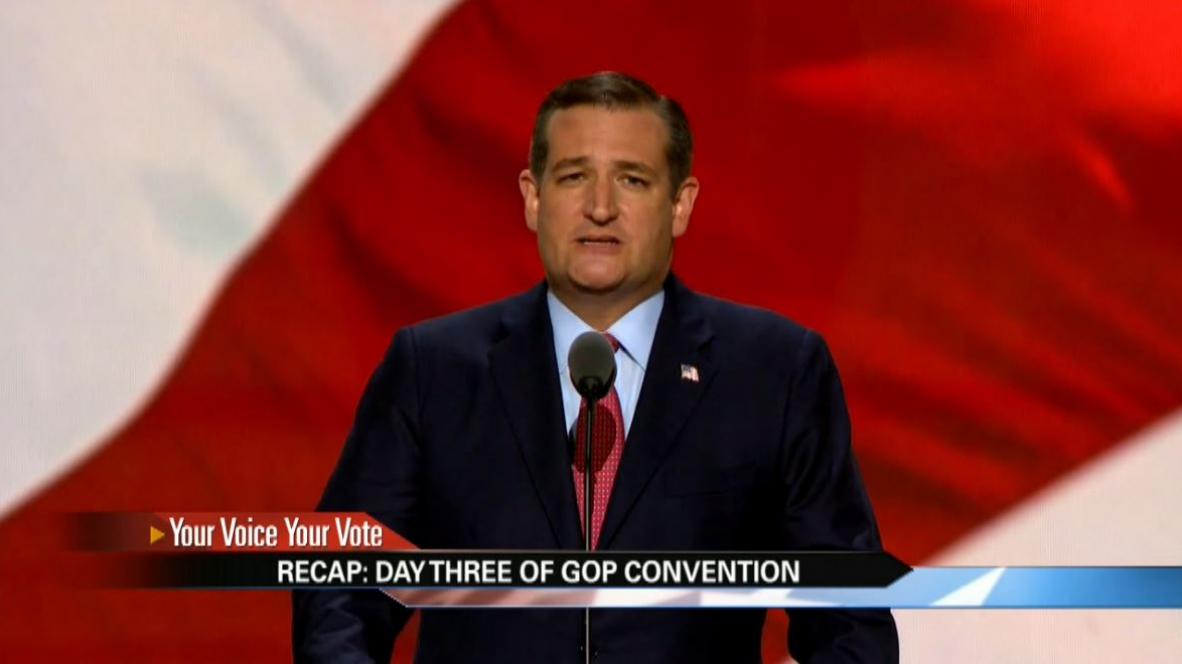 CLEVELAND (CNN) -- Volcanic political forces unleashed by Donald Trump's takeover of the Republican Party erupted Wednesday in one of most explosive nights of political theater witnessed at a party convention in the modern era.

Ted Cruz and the Republican presidential nominee staged a battle for the soul of the party, tearing open internal divides the Trump campaign has been meticulously trying heal for three tumultuous days. The convention program in Cleveland on Wednesday night was supposed to be all about Trump's vice presidential nominee, Mike Pence, pulling the party together behind Trump to take on Hillary Clinton and Democrats at the start of the fall campaign.

But Cruz's hotly anticipated speech, in which he refused to publicly endorse Trump, reignited the GOP's internal civil war.

"Don't stay home in November," Cruz told delegates. "Stand and speak and vote your conscience," he said, clearly implying that those conservatives who distrust Trump did not have to vote for him, but should back other Republicans in down-ballot races.

As the convention crowd realized Cruz had come to bury Trump and not praise him, a wave of anger and electricity pulsated through the arena. Cruz struggled to finish his address amid a seething, angry chorus of boos, jeers and chants of "Trump, Trump." The GOP nominee, meanwhile, took the situation into his own hands, dramatically entering the arena to sit with his family, stealing the crowd's attention from Cruz.

It was an unorthodox show of strength that sent a clear message that Trump is now in charge of the GOP.

The fallout was intense. Cruz's wife, Heidi, was escorted out of the convention hall amid scenes of bedlam and recrimination. The senator was barred from the executive suite occupied by billionaire financier Sheldon Adelson.

Trump's lawyer, Michael Cohen, said on CNN that "the only way to describe it is political suicide."

New Jersey Gov. Chris Christie said the Texas senator's behavior was "selfish" and said Cruz had broken a pledge taken by all the candidates to support the eventual GOP nominee.

The sensational events ran far deeper than a renewal of the bad blood that has long festered between Cruz and Trump. They were a sign that the GOP is still locked in an identity crisis and that it remains divided between the ideological true believers of the conservative movement who back Cruz and the grass-roots insurgents who fell hard for Trump.

"Wow, Ted Cruz got booed off the stage, didn't honor the pledge! I saw his speech two hours early but let him speak anyway. No big deal!" Trump tweeted.

"He's a fraud, he's a self-centered liar and should be disqualified from ever being considered as a nominee for President of the United States in the future."

Although Republican Party officials saw an advance copy of Cruz's speech before he stepped onto the stage, questions will be asked whether the campaign erred by not securing a promise of an endorsement before allowing him to speak at the convention.

'The party came together'

"Donald Trump was trying to unify the party and he's done that and notwithstanding what Senator Cruz said tonight, the party came together," he told reporters.

Former House Speaker Newt Gingrich, speaking after Cruz, said that by the logic of the Texan's arguments, Trump was actually the only viable choice for President.

"In this election, there is only one candidate who will uphold the Constitution -- to paraphrase Ted Cruz. If you want to protect the Constitution of the United States, the only possible candidate this fall is the Trump-Pence Republican ticket," Gingrich said.

A week ago, Pence was barely known to much of the country. Yet after Cruz's insurrection, his task of hailing Trump and knitting together party unity was suddenly even more imposing.

He responded with a rousing, competent address, slamming Clinton, arguing the Republican ticket represented change versus the status quo and painting Trump as a latter day Ronald Reagan.

"You have nominated a man for president who never quits, who never backs down, a fighter, a winner. Until now, he has had to do it all by himself against all odds. But this week, with this united party, he has got back up," Pence roared above the cheering crowd.

"Let's resolve here and now that Hillary Clinton will never become the president of the United States of America,"

The vice presidential nominee painted Trump as a champion of working people in the United States, of the service personnel who protect America abroad, and the law enforcement officers on the "thin blue line."

"I grant you, he can be a little rough on politicians on the stage, and I bet we see that again. But I have seen this good man up close, his utter lack of pretense, his respect for the people who work for him and his devotion to his family," Pence told the crowd, accusing Democrats of preparing to nominate the exact opposite of a truth teller in Clinton.

Cruz's speech also overshadowed the headline speaker of the night --- another of Trump's son's Eric.

For much of the speech, Trump looked on from the VIP area with a solemn look on his race, perhaps digesting what had happened with Cruz, but he rose to applaud as Eric Trump made a strong case as to why his father should be president.

"It's time for a President who can make America great again, ahead of budget and ahead of schedule too," Eric Trump said, saying his father was a man who "turned dreams into reality his entire career."

"Dad you have once again taught us by example, you are my hero you are my best friend, you are the next President of the United States."

Even as the political world was trying to digest the events of Wednesday, Trump detonated yet another controversy during an interview with The New York Times.

He appeared to call into question whether, as president, he would honor U.S. security guarantees to NATO partners. He suggested that if the Baltic states, for example, were attacked by Russia, he would decide whether to come to their aid only after reviewing whether they had "fulfilled their obligations to us."