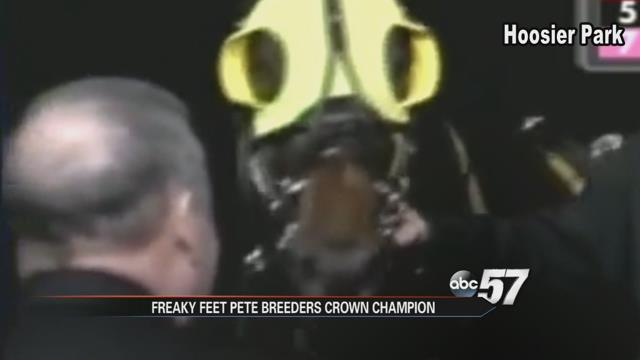 If you are familiar with horse harness racing, you know that the Breeder's Crown is a coveted title among horse harness races.The winner of that race takes home more than $500,000. This year a family from Michiana got to celebrate that victory.

Freaky Feet Pete is a three-year-old standard bred, born and raised at Rheinheimer Stables in LaGrange.

In the past two years, Pete, as he is referred to on farm, has competed in 25 races. Up until his entry into the Breeder's Crown race at the end of October, he had never competed outside of the Hoosier state.

The race was held in Canada at the end of October. He took home the title and became the first Indiana horse to win the title.

“It’s been a dream and we keep working at it and never thought we would get as far as we did,” said owner and trainer Larry Rheinheimer.

After he won that title, he won again at the Monument Circle the week after and again this past weekend at the American National. For the year of 2015, he has won 15 of his 17 starts.

It is something that makes Rheinheimer very proud.

"It’s just great. It’s a great feeling, just amazes me, you can’t believe the feeling you get out of it,” he added.

In all, Pete has raked in over a million dollars for his wins; however, he did not get to the winner's circle overnight.

Rheinheimer said he works with his horse everyday and trains him at least once a week.

“He gets out of the barn everyday. Gets exercise everyday, gets jogged. He wants to be the first horse out of the barn too and he likes it. He's all business,” he said about Pete.

Freaky Feet Pete is all done with his competitions for the year. He will begin training for next year's 4-year-old division starting sometime in December.