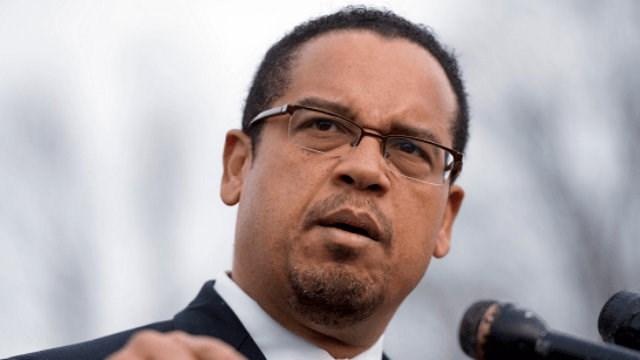 (CNN) -- The country on Tuesday elected for president a man who once proposed "a total and complete shutdown of Muslims entering the United States."

Now, the first Muslim-American elected to Congress is eyeing the position of chairman of the Democratic National Committee.

Rep. Keith Ellison of Minnesota is looking to make a run for the influential post, according to a source familiar with his thinking. Although Ellison has not yet officially commented on the speculation, the congressman has already picked up endorsements from prominent colleagues in Congress, including popular liberal Sens. Bernie Sanders and Elizabeth Warren, as well as New York Sen. Chuck Schumer, who is expected to be the next Senate minority leader. On Sunday Ellison also won the backing from the current Democratic Senate leader, Harry Reid of Nevada.

The election of the next DNC head -- and what kind of Democrats emerge as the new and younger leaders of the party -- will send an important signal about the direction that the Democratic Party takes in the aftermath of Hillary Clinton's shocking defeat to Trump this week.

If Ellison is elected DNC chair, he could play a potentially powerful role in advocating for ethnic minority groups, including Muslims, who feel deeply concerned about Trump's past comments about non-whites.

Earlier this year, CNN traveled to three growing Muslim communities and spoke to more than 40 Muslim Americans about the election. In these conversations, the community expressed emotions ranging from disbelief to anger to fear.

In an extensive interview outside of his district office in Minneapolis, Ellison said at the time that Muslims in his community feared possible backlash and spike in racial discrimination if Trump were to be elected president.

Like many others that CNN interviewed, Ellison also made a surprising revelation: that he believes things are worse now for Muslim-Americans than they were right after the September 11 terrorist attacks.

"I think it's probably harder now," he said.

Ellison described a gradual easing of tensions and normalization in the 15 years since 9/11. After becoming the first Muslim-American elected to Congress, Ellison said former President George W. Bush "extended his hand to me and said, 'Ellison, I'm glad there's a Muslim in the Congress.'"

Bush "stood with Muslims and he said that Islam's not the problem -- these terrorists, murderers and maniacs are the problem," Ellison says. "George Bush doesn't get enough credit for that."