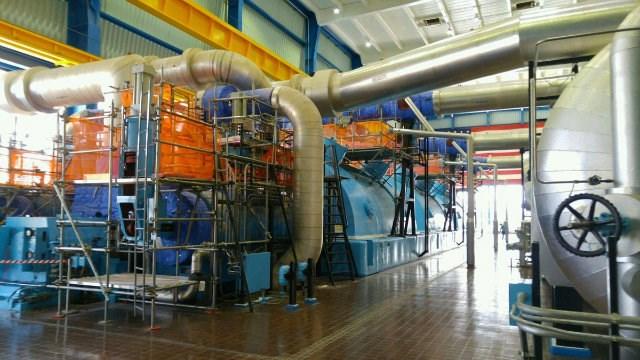 (CNN) -- The Tennessee Valley Authority is celebrating an event 43 years in the making: the completion of the Watts Bar Nuclear Plant.

In 1973, the TVA, one of the nation's largest public power providers, began building two reactors that combined promised to generate enough power to light up 1.3 million homes.

The first reactor, delayed by design flaws, eventually went live in 1996. Now, after billions of dollars in budget overruns, the second reactor has finally started sending power to homes and businesses.

Standing in front of both reactors Wednesday, TVA President Bill Johnson said Watts Bar 2, the first US reactor to enter commercial operation in 20 years, would offer clean, cheap and reliable energy to residents of several southern states for at least another generation.

"If you're in the nuclear business, the sight behind me is a lovely sight," Johnson said. "It's a sight we've been waiting for some years to see, which is steam coming out of both cooling towers, meaning that both units are running. You can hear that turbine rolling. It's a great day."

Falling out of favor

When the TVA first proposed Watts Bar, the US nuclear energy was in the midst of a golden age as scores of nuclear reactors received regulatory approval during the 1970s.

TVA started work on Watts Bar reactors in subsequent years. Before the plant went live, a partial meltdown at Three Mile Island happened in 1979. While no one died, the incident placed the US on high alert, and led to increased regulations that hampered the rapid expansion of the nuclear industry.

Seven years later, a far greater catastrophe followed with the major meltdown at Chernobyl, bringing the American industry to a standstill. Following Chernobyl, American utilities behind nuclear reactor proposals faced skyrocketing costs that forced many of those companies to nix those plans.

As that happened, though, other major world powers jumped on the nuclear bandwagon. France today gets three-quarters of its electricity from nuclear -- the US only gets one-fifth -- and China recently has pledged to double its nuclear capacity before the decade's end.

Faced with rising costs in the US -- as well as the public's growing anti-nuke sentiment -- TVA neared bankruptcy and had little choice but to suspend plans for the second Watts Bar reactor in the late 1980s.

A second life for Watts Bar 2

Before Watts Bar 2, the last time an American reactor had fired up was in 1996. It was Watts Bar 1--and according to the Atlanta Journal-Constitution, it cost $6.8 billion, far greater than the original price tag at $370 million.

In the 2000s, some American power companies, faced with growing environmental regulations, eyed nuclear power again as a top alternative to fossil fuels such as coal and oil. A handful of companies, taking advantage of federal loan guarantees from the Bush administration, revived nuclear reactor proposals in a period now known as the so-called "nuclear renaissance."

Eventually, nuclear regulators started to green light new reactors, including ones in Georgia and South Carolina. In 2007, the TVA resumed construction on Watts Bar 2, according to the International Atomic Energy Agency. The TVA originally said it would take five years to complete.

In the face of new momentum, though, some environmental groups including the Sierra Club have continued to oppose the reactor's construction following the 2011 Fukushima meltdown.

"It's 30 years later and billions of dollars over budget, but if it is going to operate we hope it is done safely and properly by TVA," Stephen Smith, executive director for the Southern Alliance for Clean Energy, told the Chattanooga Times Free Press this year.

In the end, TVA required more than five years to build the project. The final cost, far exceeding its initial budget, stood at $4.7 billion.

"After all the construction, all the pre-operational testing, all that's gone on here, today's announcement might seem to be anticlimactic to some," Johnson said outside the plant. "But, to us, it marks the end of one phase of the journey."