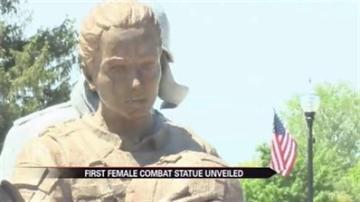 COLEMAN, Mich. -- In Michigan, a brand new memorial is an important reminder of the sacrifices our military men and women make.

A statue has been erected in Coleman that is believed to be the first statue of a female combat soldier in the United States.

According to the Defense Department, thousands of women have been killed or wounded on deployments.

This year the Pentagon gave female troops official permission to fight on the front lines in a combat role.

Women face the same difficulties as their male counterparts when they go off to war. Women soldiers have to leave families behind when the call comes to leave for combat.

The community hopes to add another statue in the near future to honor the Doughboys of World War I.