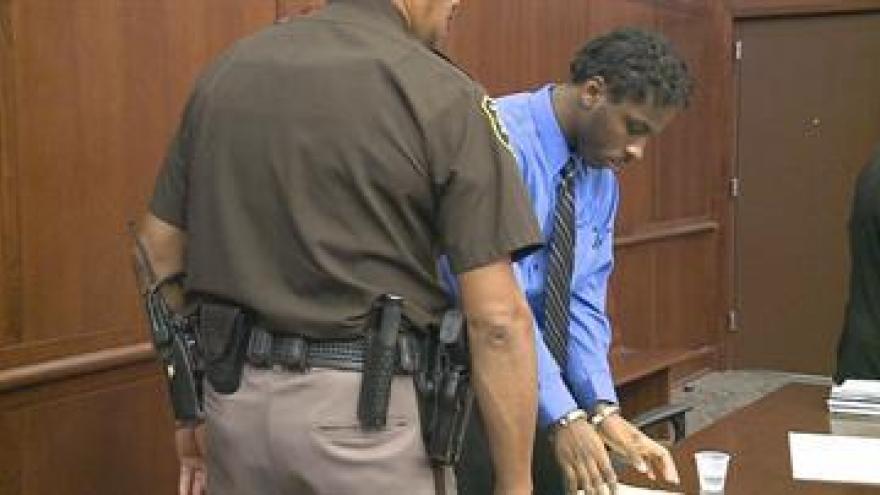 NILES, Mich. – On Tuesday, Martise Washington saw the jury that will decide his fate for the first time.  Washington is one of the five Niles High School students accused of forcing a 17-year-old girl into sex by threatening to post a sex tape with her in it on Facebook.  Martise Washington is facing seven charges, three of first degree criminal sexual conduct, one of third degree criminal sexual conduct, possession of child abusive material, an extortion charge and surveillance of an unclad individual.  Washington was the one the girl was videotaped having sex with on March 14th.  He and Trey Nichols are accused of conspiring to tape the sex without the girl’s knowledge.  On March 18th he also allegedly took part in extorting her into sex by threatening to post the tape online along with Leon Murphy, Martel Miller and Parnel Martin.

The trial began with the prosecution’s opening statement.  Prosecutor Steve Pierangeli showed a frame from the sex tape showing Nichols patting Washington on the back out of the view of the victim.  Pierangeli alleges that was a signal between Washington and Nichols that the camera was rolling and shows that they conspired to film the sex tape without the girl knowing.  Pierangeli also claimed that Washington admitted to making the tape to investigators.

Four days later, according to the prosecution, Leon Murphy was the first of the boys to let the girl know that they’d seen the tape and would post it on Facebook if she didn’t have sex with all of them.  First, Pierangeli claimed, the girl was promised that if she would have sex with Murphy the tape would be deleted.

“But that wasn’t good enough for the defendant,” Pierangeli claimed. “He said, ‘It’s my turn now.’”

Then she was taken to a car with the other boys, driven around Niles and similarly forced to have perform sexual acts on all of them.

“As she’s in this backseat crying, begging to go home, being forced to perform sex acts she didn’t want to do and they laugh,” Pierangeli claimed in court.

Then Pierangeli said the girl was taken home, where she told a friend what happened via text messaging.

“How she was feeling sick, how she wanted to just be done with things, that she was shaking,” Pierangeli described.  “She texted her friend, ‘I’m going to kill myself, I already planned it.’”

The prosecution showed copies of text messages showing the threats against the girl.  When questioned by Washington’s attorney Jim Jesse, Officer Chad Mitchell admitted that the evidence only shows that the messages were sent from Washington’s phone, not who sent them.

Kosten was also asked to read aloud a letter subpoenaed from a friend of Washington’s who was interviewed about the incident.  The letter was from Washington, who was writing because he had seen the statements the friend had given to police.

"You basically just gave the prosecutor enough fire to get my water hot, for him to cook me in and send me to prison for a long time,” the letter read.  “Just know you basically killed me already and the choice is 100-percent yours.”