Fiscal cliff compromise good or bad for you? 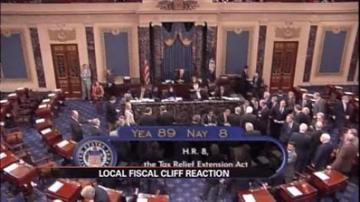 The fiscal cliff could affect your paycheck. Both Republican and Democratic political leaders locally have an opinion about how this deal could affect all of us.

Both parties are split. The republicans think this is bad deal for the American people and the democrats believe this is the best option for the majority.

"Well I was somewhat surprised this morning in a sense that there was a deal stuck by the senate to avoid the fiscal cliff that we were heading towards,” said Deborah Fleming, St. Joseph County Republican Chairman.

The deal now moves to the U.S. House of Representatives for a vote.

“Anytime you raise taxes in that range that you are really affecting the range for potential economic growth throughout our country,” said Fleming.

A range that Dr. Fleming and her dental business will likely fall under.

State Senator John Broden is hoping the U.S. House of Representatives passes the tax hike for this bracket of Americans.

"This only applies to the tax payers that make more than $400,000 and it is only about 1.5 million tax payers," said Broden. “I am very encouraged by the overwhelmingly bipartisan vote the Senate took. I think the vote was 89-8 so that shows this is a true compromise both parties had to give a little and in the end I think it's a good deal for the tax payers throughout the country."

At this point Teshka said it's all about compromise.

The House was back in session Tuesday at noon and representatives will vote on or amend the senate agreement soon.