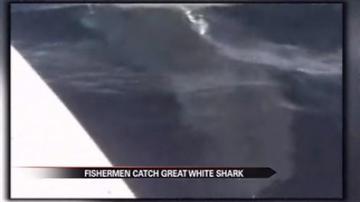 Two fishermen off the coast of Florida snagged something so big, they originally thought it was a submarine.

They caught the massive predator on their fishing rod.

The shark tried to free itself in a struggle that lasted three hours.

"We pretty much couldn't believe it. Jaws had come to town. It was a pretty crazy experience," said Captain Joe Maisano, fisherman.

In the end, the shark was too big so the fishermen let it go.