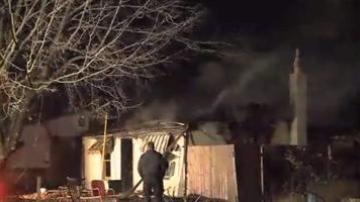 HOWARD TWP., Mich. -- Crews were called to the scene of a house fire in Cass County.

The fire sparked just after 6 a.m. Thursday. Flames ripped through the home on Sullivan Avenue behind Moulder Drive in Howard Twp., charring a big portion of the house and destroying the roof.

Roads surrounding the area were blocked off, but are now back open. Crews from Indiana Michigan Power were also called to the scene to repair power lines that went down during the fire.

Investigators are calling this fire suspicious. No one was in the home at the time of the fire.

The state fire marshal will be on scene to investigate later in the day.