Flavor 574's Marshall King looks back on his 2015 food predictions 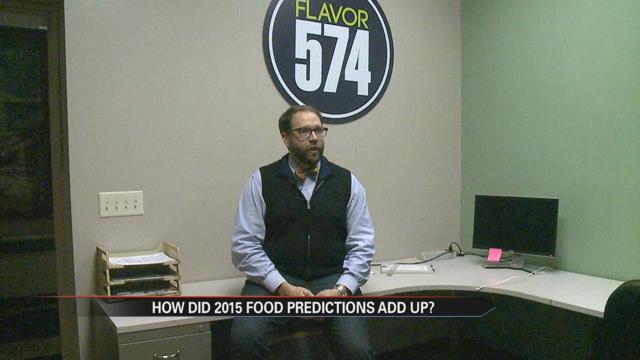 Marshall King of Flavor 574 looks back on the five predictions he made for 2015 for the Michiana food world.

“A variety of food sites have made predictions over the years, and actually, McCormick Spice company makes an annual like flavor prediction, and so, kind of from that said, oh, we could look at what I think will happen locally and in food,” King said.

So, last January, King produced his top five food predictions for the year in Michiana.

Here’s what he laid out:

1) The local high-end restaurant in Elkhart, Artisan, would stay open

2) Local meats would be on the table more

Now, King is checking in with his predictions to see how he fared.

“There were a lot of people expressing doubts about fine dining in downtown Elkhart and how that was gonna look,” King said. “And I said no, Artisan’s gonna be fine. And so a year later, the owner…said, yeah, business hasn’t been exactly as vibrant as I’d hoped over the summer, but it’s been strong and we’re not going anywhere. And so, that was one of the five predictions that has come true.”

King said there’s a growing interest from people who eat out.

“More and more people want to know the source of their food,” King said.

But for now in Michiana, local farms are unable to reach the high demands restaurants require.

“Some of the other restaurant owners and chefs in the area have said, yeah, I’d love to have locally raised steaks that are of super high quality,” King said. “It’s just not there yet.”

The third prediction – local craft beer would grow in popularity.

King said craft beer and hometown brew pubs are taking both Michiana and the nation by storm, as people continue to gravitate toward a locally produced drink.

“These have become places that people gather,” King said. “And, [they] hopefully are drinking responsibly, but enjoying high quality, locally made beer, and these have become significant parts of our community in a short time.”

In at number four – any and every parent’s dream – kids would eat healthier.

King said small steps – like the boys and girls club in Goshen hosting an iron chef challenge to promote healthy eating – are happening, but it’s limited.

“It just didn’t grow as much as I thought it would in 2015, at least from where I stand,” King said.

He said he understands how difficult it is trying to expand a child’s daily diet but he thinks local chefs and restaurants can help.

“If some of the more talented culinary professionals in our community continue to try to woo kids and offer them some healthy, but also flavorful food, that might help move us along,” King said.

And last, but not least – the rise of the cocktail.

King said, like craft beer, the cocktail is shaking things up across the country and in Michiana.

More restaurants are strengthening their menus with unique spirits.

All in all, King went three-for-five on the year.

“I think our food’s gotten a lot funkier,” King said.

And looking ahead, King said one of his predictions for 2016 – a rise in ethnic food here in Michiana.

“Where we see Indian food at some potential new places in our community could be pretty interesting,” King said.

He said Elkhart residents can look forward to a new restaurant named “Render” opening within the next year.

You can check out all of King’s articles on www.flavor574.com.

And here is a link for information about a bus trip King and his crew will be taking in January to Kalamazoo Beer Week – tickets are available online.