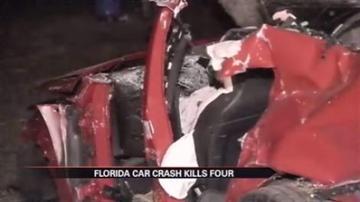 GROVELAND, Fla. -- A Florida father and his three children are dead after a car crash.

Neighbors heard the crash, then rushed outside to see the mess.

Troopers say a 41-year-old male lost control of his car and crashed between a pole and a tree, then went airborne before hitting more trees.

He was driving with his two sons and his daughter in a car seat.

"So I run over there I'm an EMT and a firefighter so I immediately start checking for pulses seeing if there's anything I can do.  Unfortunately they didn't have any pulses," said Adam Hill, witness.

The dad and one of the boys died on scene. The little girl and the other boy died at the hospital.