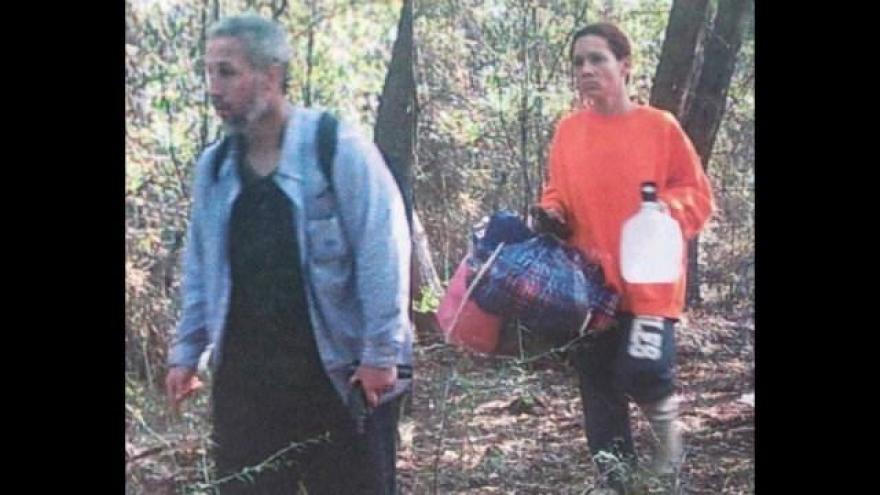 (CNN) -- A Florida man suspected of being involved in three killings is dead and his female alleged accomplice was taken into custody, the Troup County Sheriff's Office in Georgia said Tuesday.

Smith gave no other details about the end to an hourslong standoff that began when authorities were alerted that a stolen car the couple was driving was at the motel.

The pair were wanted in three slayings and a separate shooting over the past week in southern Alabama and the Florida Panhandle.

Boyette is a suspect in the killings of two women in Northwest Florida last Tuesday as well as the fatal shooting of another woman in Alabama on Friday, the Escambia County Sheriff's Office in Florida said. It, too, said Boyette was dead.

Authorities say Boyette may have dyed her hair orange. The pair were wanted on murder and robbery charges in the killing of Peggy Broz, 52, Friday morning at her home in Lillian, Alabama, according to the Baldwin County Sheriff's Office. Authorities say they stole Broz's car and fled to nearby Florida.

The pair are believed to be behind the shooting of Kayla Crocker, 28, during a home invasion in suburban Pensacola on Monday morning. Crocker is in the hospital, police told CNN affiliate WEAR-TV.

Law enforcement said Crocker was randomly targeted about 6:30 a.m. Monday by the suspects. Her 2-year-old son was present in the house and was unharmed, police said.

Boyette and Rice allegedly stole Crocker's vehicle and drove to a gas station and then to a Hardee's for breakfast, WEAR reports.

"We are looking now aggressively for someone who is a killer in our community," Escambia County Sheriff David Morgan said at a press conference.

The investigation began January 31, when Boyette was named as a suspect in the killings of Alicia Greer, 30, and Jacqueline Moore, 39. The two women were found shot to death in a motel room in Milton, Florida, police said.

Greer and Boyette had started dating several months ago, her parents Wayne and Kim Lane told CNN affiliate WALA. Her mother described Greer as "goofy" and "bubbly" and said she would do anything for anybody, according to WALA.

It was not clear Tuesday whether Rice, 37, is connected to those killings, but Sheriff Johnson of Santa Rosa County said she will face charges of accessory after the fact.