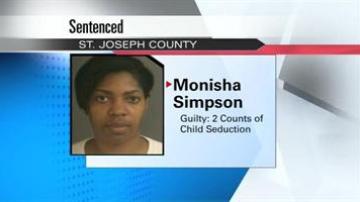 ST. JOSEPH COUNTY, Ind. -- A former South Bend school bus driver who was found guilty by a jury of having sex with a teenage student was sentenced Tuesday.

Monisha Simpson, 34, was found guilty of 2 counts of child seduction in September of 2012 for having a sexual relationship with a student who was 16-years-old at the time.

On January 11, 2013 the judge delayed entry of judgment and conviction and delayed sentencing for one year.

On January 14, 2014, the judge reduced Simpson's counts from Class D felonies to Class A misdemeanors. She was sentenced to one year each on the two counts of child seduction with the sentences to run concurrently.

Then the judge suspended the sentence and ordered Simpson to serve a year on probation.

The state requested sex offender specific terms of probation for Simpson and that request was granted by the court.